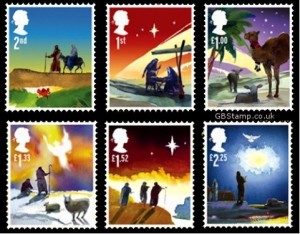 This year’s Christmas stamps issued by the Royal Mail for the UK depict a series of scenes from the Biblical story of the Nativity from the Annunciation and the journey of the Magi to the birth of Christ.

Here in Ireland Christmas stamps from An Post feature a detail of The Virgin and Child Enthroned, with Saint John the Baptist and Saint Lucy (1513) by Marco Palmezzano (c.1460–1539) and is reproduced courtesy of the National Gallery of Ireland.

The two stamps on An Post’s ‘Stamps on a roll’ format depict symbols associated with Christmas.

London-born artist, David Holmes, who studied at the Ealing College of Art was commissioned to illustrate the Royal Mail’s Christmas series, which show:

– A portrayal of the moment the Archangel Gabriel appears to Mary, telling her she would have a son, Jesus, who would be the Son of God.

– Mary and her husband, Joseph, travelling to the city of Bethlehem to register for a census ordered by the Roman Emperor, Caesar Augustus.

– Three wise men, or Magi, saw a star in the sky that signalled the birth of a new king. They followed the star to Bethlehem, to worship Jesus, carrying with them gifts of gold, frankincense, and myrrh. 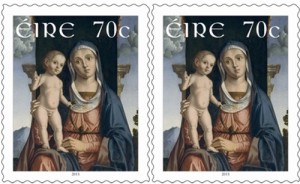 – Mary and Joseph arrived in Bethlehem to find there was no place for them to stay. The inn was already full. They spent the night in a stable where animals were kept. On that night, Jesus was born. There was no crib. So they laid baby Jesus in a manger, a feeding trough for animals.

– An angel appeared to shepherds in the fields near Bethlehem, who were keeping watch over their flocks of sheep. He gave them the good news that a Saviour, the Messiah, had been born.

– Mary and Joseph together by the manger following the birth of Jesus Christ.

The tradition of sending festive greetings by card was established in 1843 through the introduction of the world’s first commercially produced Christmas cards.

The cards were commissioned by Sir Henry Cole.

Royal Mail’s postmen and women were also responsible for the ever popular robin gracing the front of cards.

During the mid-1800s, the postman’s uniform included a bright red waistcoat to match the official red of pillar boxes.

The striking uniform resulted in postmen being referred to as ‘robin redbreasts’. The robin was introduced to Christmas cards as a symbol of the postmen who delivered the cards.

Andrew Hammond of Royal Mail Stamps said, “Christmas is a stamp issue we particularly look forward to. The charming style of these designs sets the perfect tone for the festive season.”