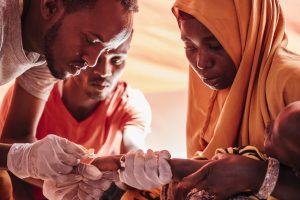 Aid workers fit a canula to a starving child in Somalia so that his life can be saved with an IV drip. (Pic Amunga Eshuchi)

As the famine situation in East Africa reaches a devastating critical phase, with millions of people at risk of starvation, the Irish Church is responding with a special appeal for aid on the weekend of Saturday and Sunday 22 and 23 July.

Because of drought and conflict, there are now severe food shortages in South Sudan, Somalia, Kenya and Ethiopia.

More than half the population of Somalia – 6.2 million people, including 3.7 million children – are suffering from food shortages and malnutrition.

More than three-quarters of the country’s livestock have died, and because of drought it is increasingly hard to find clean water to drink.

Across the country, there have been major outbreaks of cholera, known as ‘the blue death’ because of the way dehydration changes the colour of a cholera victims’ skin. The starving population also have a weakened resistance to diseases like measles and malaria, so Trócaire-funded health centres are running flat out trying to keep adults and children alive.

South Sudan is on the brink of famine as a result of prolonged drought and a civil war fuelled by ethnic tensions. 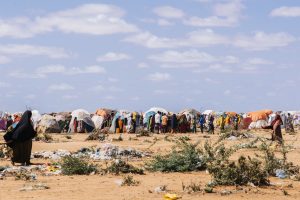 Meanwhile, in south-eastern Ethiopia 7.7 million are at risk of starvation, while in northern Kenya the number of people facing famine is expected to reach 4 million this month.

On behalf of Irish Catholics, the aid agency Trócaire is doing all it possibly can to help, and is currently providing more than 150,000 people across the region with emergency food, water and sanitation.

But given the scale of the disaster that is unfolding, much more help is needed, which is why special church plate collections will take place across Ireland at the end of the month.

In a letter to the faithful of his diocese, Archbishop Diarmuid Martin of Dublin said he was sure parishioners would respond with compassion and generosity. He also called for prayers for the staff of Trócaire and for their partners in the field, saying: “They are responding to this humanitarian crisis with dedication, courage and selflessness.”

To learn more about how Trócaire is responding on your behalf to the crisis in East Africa, and to make an immediate contribution towards helping the relief effort, visit: https://www.trocaire.org/whatwedo/wherewework/east-africa-crisis.