The annual National Grandparents’ Pilgrimage to Knock takes place at the Marian Shrine at 3 p.m. today.

Traditionally, this is one of the busiest days of the year in Knock, with thousands of grandparents, parents and children taking part in the celebrations. Indeed, in previous years, well over 10,000 pilgrims have taken part in the event.

However, because of COVID-19 restrictions, the National Grandparents’ Pilgrimage is being held online, with ceremonies streamed on the webpage www.knockshrine.ie/watch from just before 3 p.m. onward.

The founder of the Catholic Grandparents Association, Catherine Wiley, hopes that although the event is being held ‘virtually’, this year the pilgrimage may have its greatest participation levels. 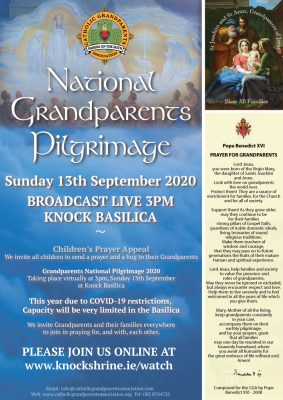 “This year, more than ever it is important for us to recognise the invaluable role that grandparents play in family life,” she said. “This has been an incredibly difficult year for so many grandparents around the world who have been isolated from their families, unable to enjoy the usual family celebrations or everyday contact which we would normally take for granted. The pilgrimage is a wonderful opportunity to make them feel cherished and valued.”

As part of the event, children are being asked to send a prayer and a virtual hug to their grandparents.

The Catholic Grandparents’ Association was founded by Catherine Wiley in 2003, after she and her husband Stewart became grandparents themselves. The couple had been living in Walsingham in Norfolk, which is home to the National Marian Shrine of England and Wales.

Subsequently, the Wileys moved to the West of Ireland and with the blessing of Archbishop Michael Neary of Tuam, an annual grandparents pilgrimage to Knock was established in 2007.

These endeavours have not passed unnoticed by Rome and, in 2008, Catherine Wiley was invited to address a plenary meeting the Pontifical Council for the Family in Rome, which then led to the foundation of the Catholic Grandparents’ Association .

Pope Benedict XVI not only giving the endeavour his blessing, he composed a special poem for the CGA, which is reproduced below.

Lord Jesus, you were born of the Virgin Mary, the daughter of Saints Joachim and Anne.

Look with love on grandparents the world over. Protect them! They are a source of enrichment for families, for the Church and for all of society.

Support them! As they grow older may they continue to be for their families strong pillars of Gospel faith, guardians of noble domestic ideals, living treasures of sound religious traditions.

Make them teachers of wisdom and courage, that they may pass on to future generations the fruits of their mature human and spiritual experience.

Lord Jesus, help families and society to value the presence and roles of grandparents. May they never be ignored or excluded, but always encounter respect and love.

Help them to live serenely and to feel welcomed in all the years of life that you give them.Mary, Mother of the living, keep grandparents constantly in your care, accompany them on their earthly pilgrimage and by your prayers, grant that all families may one day be reunited in our heavenly homeland, where you await all humanity for the great embrace of life without end.