Walk of Light brings Advent message to the capital 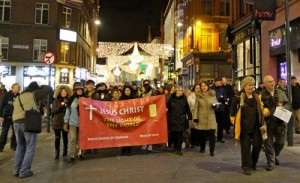 Courtesy: United Dioceses of Dublin and Glendalough (Church of Ireland)

About 200 people took part in the 10th annual Dublin Council of Churches ‘Walk of Light’ on Sunday evening (22 November).

The inter church journey began in Rathmines and concluded with participants bringing their message to the heart of Dublin carrying their banner down Grafton Street which was filled with shoppers.

In a world that is increasingly broken, the people of Paris, Beirut, Syria, Iraq and other conflict torn areas were remembered throughout the journey. Refugees and homeless people were also brought to mind.

“As Christmas approaches with glitter, jingles and lights in shops and streets, we set out and declare publicly and together that Christ is the light that has come into the world.”

“The darkness of the November evening reflects the sombre mood of our times with terror striking in the heart of Paris, homelessness at crisis point in our city, millions of people displaced and on refugee treks all across the globe and with climate change threatening the lives of other millions of humans as well as of thousands of animal and plant species,” the Walk of Light organisers declared.

“Coming into the light of Christ’s presence allows us to overcome our despair and take courage to deal with the challenges we are facing in our city, in the world and in our personal lives,” they added.

Gathering at the first church, Mary Immaculate, Refuge of Sinners in Rathmines, walkers were welcomed by Fr William King, Adm of Rathmines who urged participants to reflect on the plight of those who are marginalised and to pray for those who were effected by the unrest in the world.

This year’s Walk of Light charity was Rathmines Women’s Refuge and Lorraine Donoghue highlighted their work as the refuge prepares to celebrate 30 years in the community.

During the service there were offerings of wisdom from each tradition: Presbyterian, Anglican, Quaker, Methodist, Ethiopian Orthodox Tewahedo Church, Lutheran and Roman Catholic.

The next stop was St Finian’s Lutheran Church on Adelaide Road which began with an Ethiopian Orthodox Prayer in Amharic. Pastor Martin Sauter observed that being on the road had many challenges as homeless people and refugees across the world could testify to.

The Revd Andrew McCroskery, Rector of St Bartholomew’s, gave a reflection on the Magnificat. He said the Magnificat challenges our pride and the worldly values we get caught up in.

He said it encourages us to see the world through God’s eyes stripping away all the manufactured images of what it is to be wealthy, powerful and strong.

“God turns everything on its head to raise up the lowly. Our power and our wealth is through the ultimate weakness of the cross,” he said.

The Walk of Light concluded in St Teresa’s Carmelite Church on Clarendon Street where the Prior, Fr Christopher Clarke, asked people to remember those in war torn places and Christians who  were persecuted for their beliefs.