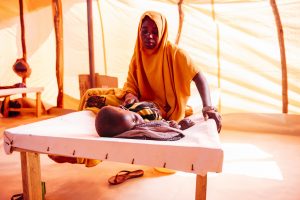 Trócaire’s spokesperson for East Africa has described the situation there as “really desperate” with 25 million people facing starvation due to a famine caused by drought.

The Irish bishops have announced a national Church collection in parishes across the country on 22/23 July for the people of Kenya, South Sudan, Somalia and Ethiopia.

The money raised will be donated to Trócaire, the bishops’ overseas development agency, which is delivering emergency food, water and health care to those affected.

The United Nations has described the situation in the drought-ravaged parts of Africa as the greatest humanitarian crisis since the Second World War.

Trócaire has a long-standing presence in all four affected countries and is working with local communities to deliver life-saving aid, including food, water and health care, to hundreds of thousands of those worst affected.

Speaking to Catholicireland.net, Eoin Wrenn expressed surprise at the lack of media interest in the terrible situation.

“It is incredible how little attention this crisis has received globally. Parts of South Sudan and Somalia are at high risk of falling into famine over the coming weeks. The situation is also terrible in parts of southern Ethiopia and northern Kenya, where millions have been left reliant on aid,” he said.

He said Trócaire’s team in Kenya had never seen the situation this bad.

In the Turkana region in the north of the country, around 30 per cent of people are severely malnourished.

“The drought has killed animals and crops, leaving people with nothing. The people affected are the most vulnerable: subsistence farmers who rely on a small patch of land and a few animals for survival,” Eoin Wrenn explained.

When it doesn’t rain, these people are left with no way to provide for themselves. Even if the rains come over the next few weeks, it will be months before anything will be harvested, meaning that around 25 million people are facing into a prolonged period of hunger.

“Trócaire is responding in all four countries, providing food, water, health care and other vital aid to people affected. Our health centres in Somalia are treating around 19,000 people each month for malnutrition, cholera and other illnesses. The situation is so bad that we are appealing for more support from the Irish public to enable us reach even more people,” he said.

Thanking the bishops for calling for the national Church collection, Mr Wrenn paid tribute to Irish parishes which he said “are always so generous”.

He added, “We hope that people can support this appeal and help us deliver even more life-saving aid across East Africa.”

Archbishop Eamon Martin of Armagh appealed for support for the collection.

“With the failure of successive rains and a prolonged drought having taken hold of the region, just surviving has now become the main challenge facing people in large parts of East Africa. Millions of people in the region are facing starvation. The crops have failed and animals are dying because of a lack of grazing and water.

“The large number of people affected may shock us, but we must realise that behind these stark numbers are real people: mothers and fathers unable to provide for their hungry children.”

Appealing to people to respond with generosity, Bishop William Crean of Cloyne, who is chairperson of Trócaire, said the agency is already working on the ground saving lives.

“Trócaire is currently running an advertising campaign to raise awareness of this crisis. We have been providing emergency food aid, water and health care to affected communities – quite literally life-support for affected people. Trócaire’s health centres in Somalia are treating approximately 19,000 people each month for malnutrition and associated illnesses.”

With the support of parishioners here at home in the coming weeks, many tens of thousands more people will receive help.

For example, over 13,000 children in Kenya will receive supplementary high-energy food, new boreholes will be provided for communities, many more people will receive monthly food rations and schools will be supplied with water.

Bishop Crean further commented, “Globally, this crisis has received very little attention. Appeals for aid are under-funded. For example, the UN has received just 37 per cent of the funding it needs to respond to the crisis in Somalia. The world is distracted by the actions of a handful of powerful politicians, while in East Africa millions suffer in silence. It is unacceptable for so many to go hungry.”