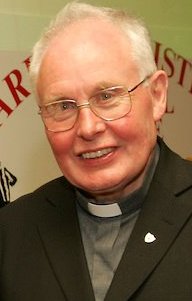 A group of Laois county councillors are campaigning to have a section of the N80, currently dubbed the ‘Northern Relief Road’, renamed in honour of a much-loved parish priest, Fr John Fingleton, who died in 2015.

A motion to that effect was tabled by Independent politician Cllr Ben Brennan, who described Fr Fingleton, the former parish priest of Graiguecullen-Killeshin, as “a great man”, who worked for the development and improvement of Graiguecullen village, which lies just across the River Barrow from Carlow town.

“He did an awful lot of work. To me he is a saint,” Cllr Brennan told the most recent meeting of Laois County Council.

Speaking to CatholicIreland.net, Cllr Brennan said: “Fr Fingleton was instrumental in getting a swimming pool in Graiguecullen and he also played a major role in getting the N80 Northern Relief Road built. He worked for the benefit of Carlow town.”

The politician’s proposal was supported by Cllr Padraig Fleming of Fianna Fáil and Cllr Aisling Moran of Fine Gael, according to a Leinster Express news report. Cllr Fleming said: “The Lord have mercy on him, he was a great man.” Cllr Moran, noting that Fr Fingleton had married her parents, said the priest was “a great character”.

However, Laois County Council senior roads engineer Adrian Barrett said the council had no policy on naming infrastructure or installing commemorative plaques. He said that if the councillors wanted to name a section of the Northern Relief Road ‘Fr Fingleton Road’ they would have to bring in a policy allowing for that to happen. Furthermore, that policy would need to be brought before the county’s new Roads and Environments Strategic Planning Committee before the proposal could be brought before a full council meeting.

According to the Leinster Express, Cllr Fleming contested that there was no policy in effect. “I don’t accept this answer one bit,” he is reported as saying. “We all got emails to say that Carlow and Laois County Councils have agreed to call the road from the Sleaty Roundabout to the Athy Road after William Dargan who was from Killeshin. Carlow are always trying to claim him. That is less than half a kilometre from this road.”

Cllr Brennan told CatholicIreland.net: “That section of road will be named after Fr John Fingleton. We will be successful: that has to happen.”