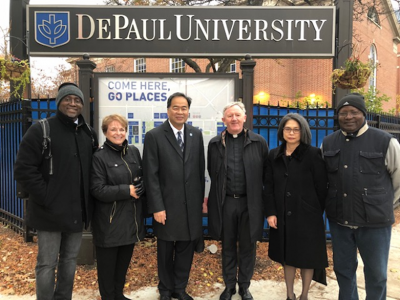 An Irish missionary who is Bishop of the Kenyan diocese of Kitale has been appointed to the first governing Council of Tangaza University College in the Kenyan capital, Nairobi.

Co Cork-born Bishop Maurice Crowley is a member of St Patrick’s Missionary Society. He will join well known Irish missionary, Fr Padraig Devine, a member of the Society of African Missions, on the same council.

Tangaza College is a Catholic University College jointly owned by a number of religious congregations.

Originally, Tangaza University College, began as the Theological Centre of Religious, in August 1986. The original aim of Tangaza was to form members of religious orders for ministry in the church and society in Africa.

In November 1992, the Catholic University of Eastern Africa (CUEA) was granted a university charter by the President of Kenya. With the conferring of this charter, Tangaza University College was recognised as a Constituent College of CUEA.

While remaining adminis­tratively autonomous, Tangaza University College is an integral part of the main University (CUEA) for academic purposes.

Rev Prof Lawrence M. Njoroge, who is professor of Development Studies and Ethics at Jomo Kenyatta University of Agriculture and Technology, is the Council Chair of Tangaza University College. The student body is multi-ethnic and inter-religious from across Africa and other countries around the world.

Bishop Maurice Crowley is a native of Berrings, Co Cork. He was appointed Bishop of Kitale in 1998. At that time, the new diocese had just 16 parishes with 15 local priests; today it has 34 parishes with 68 priests.

He has played a leading role in expanding education facilities throughout the diocese which now has over 500 Catholic sponsored primary and secondary schools. In addition to his new appointment, he is also a member of the Council of the Catholic University of Eastern Africa.

Fr Padraig Devine is a native of Frenchpark, Co Roscommon. He set up the Shalom Centre for Conflict Resolution and Reconciliation in 2009.

His efforts in peace-building started attracting international recognition when he was awarded the 2013 International Caring Award joining recipients that include the Dalai Lama, former US President Jimmy Carter, Mother Teresa and Senator George Mitchell.

In 2014, eight countries in Eastern Africa presented him with the prestigious IGAD Award for his visionary contribution to peace and development in the vast region.

He is a regular guest speaker at leading universities in the USA, including Harvard and DePaul. He is an adjunct faculty member and Honorary Senior Research Fellow at the Edward M. Kennedy Institute for Conflict Intervention at Maynooth University.

Fr Devine has been lecturing for over 10 years at Tangaza College. Prior to that he served on the college’s previous board for 12 years and was its deputy chairperson.

Reacting to his appointment to the council, Fr Devine said he looked forward to contributing to its governance and administration.

“The mission of the college is to provide an all-round quality education in an environment which promotes freedom and responsibility, excellence in teaching and learning, research and scholarship, ethical and integral development in service to society.”

The missionary priest added, “The college strives for the integral formation in the physical, intellectual, moral, social, and cultural dimension of its students. What I really like is that the skills of bringing about social transformation and justice for the poor and oppressed are integrated into every aspect of the educational process at the college.”