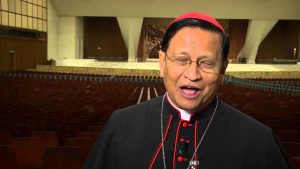 The leader of the Catholic Church in the troubled south-east Asian state of Myanmar has warned that the Rohingya Muslims are not the only group being terrorised by the country’s repressive military.

In an address in South Korea, Cardinal Charles Maung Bo of Yangon warned that while global attention is focused on the Rohingya crisis, another ethnic minority, the predominantly Christian Kachin, are being persecuted by the military.

Speaking at the Korean Peninsula peace-sharing forum 2018 at the Catholic University of Korea in Seoul on 1 September, Cardinal Bo said the suffering the Rohingya have endured has captured the world’s attention and described their plight as an “appalling scar on the conscience of my country”.

But he also highlighted how other targeted groups are being overlooked as conflict rages in Myanmar.

He said thousands of ethnic minorities having been injured, killed and displaced.

In his address at the peace forum, Cardinal Bo revealed how villages have been bombed and burned, women raped, churches destroyed, and villagers used as human minesweepers and human shields.

He said a series of ‘wars’ were being raged in Myanmar against those who espouse religious freedom by forces preaching religious intolerance and hatred.

There had been military air strikes in Kachin state in February and a major offensive in April that led to more than 7,000 people being displaced.

“These ‘wars’ continue even though Myanmar has moved over the past eight years through [a series of] reforms and made a fragile transition from a military dictatorship to a fragile democracy,” said the 69-year-old prelate.

The Kachin, who number about 1,600,000, live in the mountains of northern Myanmar near the border with China.

After Myanmar gained independence from the British in 1948, they were promised equality and self-determination. However, conflict broke out after the military seized control in 1962 and the Kachin Independence Army (KIA) was formed to defend Kachin land.

The situation deteriorated in 2011 when some 100,000 people were displaced. There are some 116,000 Catholics among Kachin state’s 1.6 million Christians.

Cardinal Bo has widely advocated for reconciliation in Myanmar between the military and ethnic armed militias.

When Aung San Suu Kyi came to power in 2016, it was hoped she would put a stop to the fighting. But the situation in Kachin state has since worsened, just as the Rohingya crisis to the south has escalated.

Aung San Suu Kyi has called on rebel armed groups to sign a National Ceasefire Agreement – which was brokered between Myanmar’s government and eight rebel groups in October 2015.

But the Kachin Independence Army was unwilling to lay down arms while the military continued to bomb Kachin villages.

One of the reasons the military is anxious to control Kachin state is its mineral wealth, which includes amber and jade mines.