Home > Featured > “We must confront the truth, confront our own failures”

“We must confront the truth, confront our own failures” 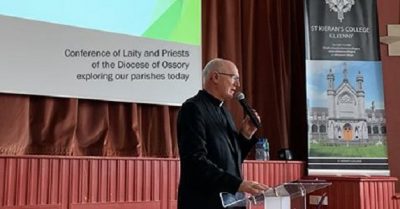 The Church can never again abandon the victims and survivors of child sexual abuse by clergy, the Bishop of Ossory has said.

“We must confront the truth, confront our own failures, and act to bring healing and justice to those who have been robbed of both,” Bishop Dermot Farrell said in his homily for a Mass of Atonement for victims and survivors of child abuse at St Mary’s Cathedral, Kilkenny.

Dr Farrell said that because victims were not listened to in the past they were left to cope with suffering on their own at a time when they were most in need of help and attention.

“This added loneliness and isolation to the crucible of suffering so many innocent children were made pass through.”

The former president of Maynooth said a great deal had been learned from those women and men who have been able to reveal what had happened, and found the courage to speak the unspeakable.

“By listening to survivors of child abuse I have come to a personal understanding of the overwhelming pain and damage victims endure; many others have been helped to make the same journey.”

He told the congregation in Kilkenny that they were gathered to pray for healing and justice for the victims of sexual abuse, and to remind themselves of the need to ask for forgiveness, as a Church, for the wounds of suffering caused by sexual abuse.

The national day of prayer on 15 February was not only to acknowledge and atone for the Irish Church regarding child sexual abuse, but also to pray for healing and eventual freedom for both the survivors and their families and for the larger family of the Catholic Church.

“The call to repentance for these grievous crimes and sins of some of our clergy is made with real contrition, public repentance and genuine sorrow,” he said.

Dr Farrell added, “If there is to be atonement and healing for the devastating effects of the sexual abuse, there must be a spirit of humble confession of fault and realism about our failures.

“In praying for healing for all who have been manifestly scarred, we are joined in solidarity with victims and survivors in their call for the whole Church to face these terrible crimes and fundamentally commit to work for justice.”

Bishop Farrell acknowledged that people had rightly felt sorrow, disgust and outrage over the abuse scandals.

“These are appropriate feelings, the stirrings of the conscience of a people scandalised by the terrible reality that too many of the clergy who promised to protect their children, and strengthen their faith, have been responsible for damaging both.”

He also admitted that speaking of the sexual abuse perpetrated by some members of the clergy was painful and unpleasant.

“However, it is vital that we recognise the truth, even about the past, and communicate it honestly and forthrightly. Otherwise we risk further wounding the victims and continuing to undermine the substance of the Church’s mission.”

He thanked the victims who had had the courage to come forward and share their wounded history by members of the clergy.

“The survivors of abuse have become true heralds of hope and ministers of mercy. Humbly, we owe each of them and their families our gratitude for their immense courage in making Christ’s light to shine upon the evil of sexual abuse of children.”