Home > News > Muslim who shielded Christians dies of his injuries

Muslim who shielded Christians dies of his injuries 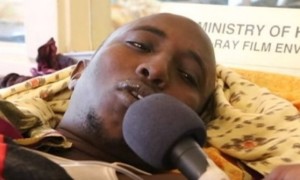 A young Muslim teacher who shielded Christian fellow passengers with his own body when their bus was attacked by Islamist militants in Kenya in December has died of his injuries.

Salah Farah (26) was a teacher. He died in hospital in Nairobi during surgery to remove a bullet. He leaves his wife, who is expecting a child, four other children and his elderly father.

Mr Farah was on a bus travelling through Mandera when it was attacked by al-Shabab on 21 December.

The attackers told the Muslims to move away from the Christian passengers, but Farah, together with several other Muslim passengers refused.

Mr Farah told the BBC, “They told us if you are a Muslim, we are safe. There were some people who were not Muslim. They hid their heads,” he said.

“We asked them to kill all of us or leave us alone.”

Mr Farah’s brother Rashid says he hopes his brother’s death will bring religious harmony and encourage Kenyans to live as one community.