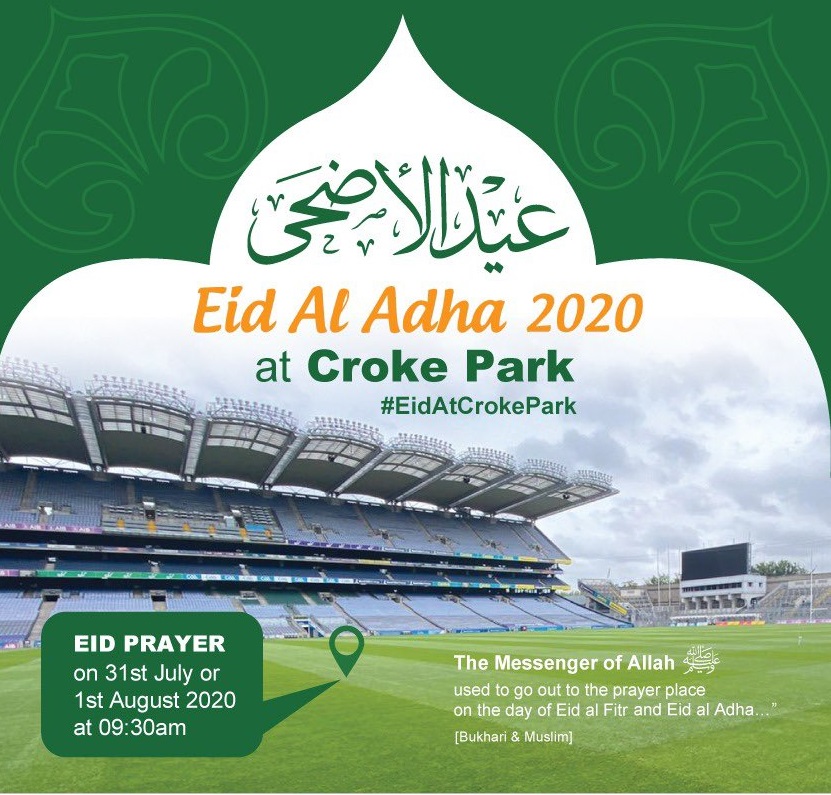 Within two hours of making it public, Croke Park was fully booked out for the Eid al-Adha Muslim religious celebration which is to take place there in the coming weeks. While up to 500 people have booked, there has been a slowdown of the easing of COVID-19 restrictions and now there is a question mark over just how many will be able to attend.

Questions were also raised about Croke Park being used for a blood sacrifice ritual and whether animals would be slaughtered on the day, but organisers said that no animals would be slaughtered within Croke Park, nor would any food be consumed. Muslims do usually consume meat at Eid, but this comes from animals that are killed in a “controlled environment” such as an abattoir or according to halal standards.

Shaykh Dr Umar Al-Qadri, speaking on behalf of the organisers, stated: “The historic Muslim celebration of Eid Al Adha at Croke Park this year will be a positive representation of Ireland’s growing diversity of many different faiths and communities. Invitations have been extended to other faith leaders and politicians to attend.”

He said that he was delighted at “this wonderful gesture” from the GAA to Irish Muslims and explained that the Germans are opening an Ikea car park for Muslims on Eid and in Ireland the “iconic Croke Park” is to open.

Shaykh Dr Umar Al-Qadri, who is chairman of the Irish Muslim Peace and Integration Council (IMPIC), said: “Many people living in Ireland who are members of the Muslim faith call Ireland ‘home’. Irish Muslims have contributed significantly in many sectors across our country, especially the health sector.

“Croke Park as a venue for Eid Al Adha celebration will be symbolic to Irish Muslims in their ‘dual-identity’ as being both Irish and Muslim.”

He added that the GAA is making great strides in embracing all communities nationwide and promoting social inclusion.

The GAA stated that it was pleased to confirm that Croke Park Stadium will host the Muslim celebration. “Normally Croke Park and our other stadia would be a hive of activity at this time of the year with the staging of games but we are living through a very different year,” said GAA president John Horan. “I believe the staging of this celebration fully supports our commitment to inclusion and a GAA welcome linked to our belief that it’s ‘Where We All Belong’.”

The issue of a venue arose because mosques, like all other places of worship, have been closed since 12 March. As a result of these Government restrictions, and in a break with tradition, this year the holy month of Ramadan and Eid al-Fitr celebrations took place in homes during the COVID-19 lockdown.

Mosques have opened their doors since but with a limited number of worshipers. As Eid al-Adha is a major Muslim celebration, like Christmas is to Christians, the decision was taken to celebrate it outdoors and Croke Park was available.

Shaykh Dr Umar Al-Qadri promised that social distancing and other relevant precautions will be taken, stating: “Unfortunately, this year we are unable to accommodate more people due to COVID-19 restrictions. We will ensure to abide by the Government’s guidelines and implement social distancing at the event.”

It has been reported that up to 500 people will attend the celebration at Croke Park on either 31 July or 1 August, depending on the moon. In the last (2016) census, 63,400 people in Ireland declared their religion as Islam. That compares with 3.7m who declared themselves as Roman Catholic and 126,400 as Church of Ireland. After these two religions, Islam was the third most popular religion in Ireland. The CSO describes Islam as one of the fastest-growing religions in Ireland.

Croke Park is the headquarters of the GAA and it hosted a major Catholic event, the Festival of Families, during the World Meeting of Families in 2018, with Pope Francis present.