Musicians and choirs meet in Maynooth 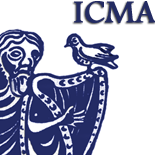 “This year we are building up to the historic visit of Pope Francis in August,” said Fr Turlough Baxter, chairman of the Irish Church Music Association (ICMA). “Many of those involved in preparing the liturgy and music in parishes around the country will be preparing various events to prepare for this and the World Meeting of Families (WMoF), and we hope that what we have to offer will be of help to all.”

The summer school began on Wednesday, with the evening prayer that day based on the liturgy that is to be celebrated in each cathedral throughout the country when WMOF2018 begins.

“On Friday [musical director] Derek Mahady will give a workshop to introduce the music that will be used for the morning prayer and Masses in the RDS, as well as at the Papal Mass,” said Fr Baxter.

Over 100 singers and musicians from around the country are attending the event, which runs from Wednesday 27th June to Saturday 30th June.

The theme of this year’s summer school is “Faith, Hope and Love”. The theme reflects the events planned for each of the three days of the Congress of the upcoming World Meeting of Families in the RDS from 22nd to 24th August.

Bishop Donal McKeown of Derry will celebrate Mass on Friday evening at 5pm and afterwards will launch a collection of Mass settings in Irish by Irish composers. 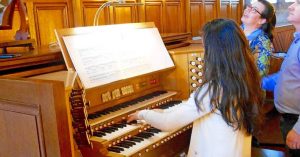 Masterclasses and workshops include everything from choir to organ work, Irish language liturgy to liturgical composition and even how to motivate “the reluctant assembly” (or congregation) to join in with the singing.

John Bell from the Iona Community and Philip Stopford will be present each day and will lead a standalone masterclass on Saturday. John Bell is based in Glasgow and with his colleagues has produced more than 15 collections of songs and octavos. He oversaw the production of a substantial hymnal for the Church of Scotland which in North America is called Hymns of Glory, Songs of Praise (Canterbury Press).

Last year An Leabhair Aifrinn (the Roman Missal in Irish) was published. To mark this initiative the ICMA school has invited John Jones to present a workshop of music in Irish. Some of this will be used for the Eucharistic celebration on Friday evening. John Jones has been a musician and composer involved in sacred music for over 35 years. He is based at St John’s Church, Tralee, and has a particular interest in music in the Irish tradition.

On Thursday night Our Lady of Victories Gospel Choir, directed by Ciaran Coll, will perform. The choir is ten years old this year and has just launched a new CD.

On Friday night the school is hosting a singalong of  The Messiah, directed by Philip Stopford. His career spans Westminster Abbey, Canterbury Cathedral and St Anne’s Cathedral in Belfast, to name but a few. The Cathedral choirs recorded CDs under his direction, including Mysterium, Celtic Inspirations, and Hymns for Priory Records. He currently works at Christ Church, Bronxville, near New York City.

ICMA was founded in November 1969 to support the work of musicians working in the field of liturgical music in Ireland. ICMA is supported by the Irish Bishops’ Conference and is based in the National Centre for Liturgy, Saint Patrick’s College, Maynooth, Co Kildare. It has a membership of approximately 250 people, drawn from church music enthusiasts and choristers from all over Ireland.