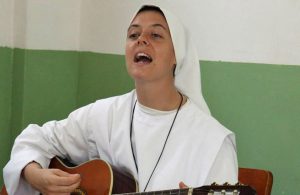 A new mural was unveiled in Derry City on Sunday evening commemorating Sr Clare Crockett who died four years ago in an earthquake in Ecuador.

Bishop Donal McKeown blessed the mural which is located on the side of Ladbroke’s Bookmakers on Deanery Street.

It was created by UV Arts, the company behind the Derry Girls mural in Derry city centre.

The blessing on Sunday was followed by a candle lit rosary at the Brandywell grotto at 6.30pm and Mass at 7pm.

Speaking in St Eugene’s Cathedral on Sunday, Bishop McKeown said, “It is perhaps symbolic that the large painting is on the gable wall of a bookie’s shop!”

He added that Sr Clare had “a remarkable story of teenage dreams of fame and fun followed by a conversion to give all for Jesus – without ever losing her energy and sense of joy or love of people.”

Since her death in 2016, people around the world have begun praying to Sr Clare, asking for her intercession, while her grave in Derry City Cemetery has become a place of pilgrimage.

A novena prayer to Sr Clare, written by her order, the Servant Sisters of the Home of the Mother, has been circulated.

According to Sr Clare’s sister, Shauna Gill, the mural “belongs to the people of Derry”. She explained that it had been paid for through people’s donations for religious candles.

The 33-year-old nun died along with five postulants of the Servant Sisters of the Home of the Mother when a stairwell collapsed as they were attempting to escape their school building in Ecuador’s Playa Prieta in the massive earthquake. They were among the 520 people to lose their lives in the tragedy.

At her funeral Mass in St Columba’s Church, Long Tower in May 2016, local parish priest Fr Eamon Graham told mourners that the young nun was “a striking example of Derry womanhood” as he reminded them that the women of Derry down the decades had been “strong” and often the breadwinners for their families in a city which had suffered much.

Bishop Donal McKeown said Sr Clare had seen heroism and idealism alongside loss and betrayal in the city where she grew up.

“What held – and still holds – communities together in terrible times were the strong men and women and the strong community ties that would not be crushed by violence, loss and a seemingly hopeless future,” he said.