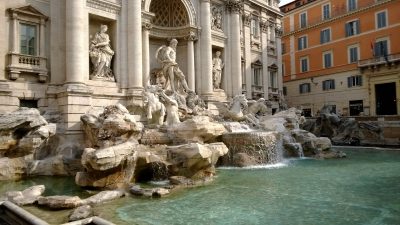 Rome’s largest Baroque fountain is at the centre of a church–state power struggle over who should receive the money it generates.

Rome’s mayor, Virginia Raggi, insists that funds generated by the Trevi Fountain should go to municipal social solidarity and assistance projects rather than to Church-run social welfare programmes.

Designed by Nicolas Salvi in the 1730s following a contest organised by Pope Clement XII, the Trevi Fountain is a must see for any visitor to Rome, not least because of a tradition that claims that anyone who casts a coin into its waters – from their right hand, over their left shoulder, with both eyes closed – will return again to Rome one day.

A further elaboration of the superstition has it that anyone who throws two coins into the fountain in the prescribed manner will fall in love with a Roman, and anyone who throws in three coins or more will marry one.

As a result of the tradition, the fountain is a substantial source of money. Tourists throw an estimated €4,000 a day into the Trevi’s pools and cascades every day. The total amount last year was more than €1.5m.

Recently, that money has gone to Caritas Italia, an agency of the Italian Bishops Conference, established in 1971.  Officially, the Irish equivalent of this Italian agency is Trócaire, but there are significant differences. While Trócaire is the Irish bishops’ overseas development and aid agency, Caritas Italia funds and carries out good works across Italy, as well as overseas. Its projects include food kitchens, mental health initiatives and supports for the homeless.

Around 15 per cent of Caritas Italia’s annual budget is spent on helping the poor of Rome, with a significant portion of that coming from the Trevi Fountain.  But now Mayor Raggi has said it would be more appropriate for that money to go to supporting the city council’s social initiatives, which are under enormous pressure because of the city’s enormous public debt of €14bn. So from 1st April this year, all coins collected from the Trevi Fountain will now go into a City of Rome municipal fund.

So far, the Italian bishops have not commented, but last week the issue was highlighted in Avvenire, the Milan-based newspaper that enjoys close links with the Italian hierarchy. Writer Luca Liverani commented that if the funds are to be managed by city council employees, a significant proportion will be lost in administration costs, as tasks carried out by Caritas volunteers, such as physically sorting and counting coins, will have to be paid for.

Furthermore, as a charity, Caritas can provide assistance directly to needy families in ways impossible for civil service agencies, with Mr Liverani citing as an example the one-off grants given by Caritas to needy families to help cover unforeseen domestic emergencies. He said, as a result of the change, the people who most need help in Rome will lose out.