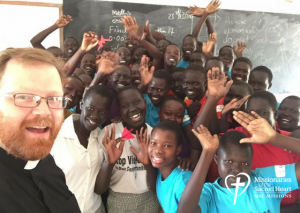 The Missionaries of the Sacred Heart (MSC) have made South Sudan the focus of their 2017 Summer Appeal and have embarked on a fundraising drive in support of the Loreto Sisters’ projects in the war-torn African country.

The collaborative venture between the MSC mission office and Loreto in the South Sudanese city of Rumbek is bringing life-saving aid to vulnerable families and supporting medical and educational projects in the region.

The fresh outbreak of civil war in 2013 caused chaos to descend once more on the people of this new state. Schools and medical centres have been burned to the ground. Abduction, rape and murder are commonplace. The economy has all but collapsed.

In 2008, the Loreto Sisters began working in the rural community of Maker Kuei, Rumbek, where daily life is a constant struggle for over 1,000 families.

The people of Maker Kuei are challenged by high unemployment, or jobs that pay as little as €2.27 per month. Tribal violence and riots are a common occurrence while many girls are faced with forced marriages, where they are exchanged for “cattle dowries”.

There is widespread lack of medical care, with one trained doctor per 65,000 people. A 15-year-old girl is more likely to die in childbirth than she is to finish secondary school.

The Missionaries of the Sacred Heart are joining forces with the Loreto Sisters so as to reach out to families who have nowhere else to turn.

In South Sudan, the majority of people do not have access to medical care, and those that do cannot afford the prescribed medication. Many local people are resistant to modern medicine and prefer to visit traditional witchdoctors. Misdiagnosis, misuse of drugs, and misapplication of treatments often lead to worsening symptoms – or even death.

In her July 2017 newsletter, Sr Orla Treacy IBVM explained that “preventative healthcare is unheard of in the Maker Kuei community, and throughout most of South Sudan”.

Sr Penina, who works with the Loreto Primary Health Care Unit  (PHCU), has reached out to the children of the community through the school, providing primary healthcare and treatment.

Recently, both the primary and secondary school students received deworming treatment, as well as a general physical which allowed Sr Penina’s team to diagnose and treat hundreds of cases of iron deficiency, vitamin A deficiency, fungal infections, malaria, respiratory infection, gastritis and anaemia, and provide general treatment for wounds.

“While this may not seem significant, for this community, this type of treatment – treatment before the deficiencies, illnesses, or wounds become life altering or threatening, is unheard of. And the benefits to health have already started to be seen in the community, as children and community workers, parents, and leaders encourage their peers to go to the clinic before it becomes a significant issue, and before seeking traditional healers. There is still much work, but small changes like this are extremely encouraging,” Sr Orla Treacy explained.

She also highlighted how one young woman – Claire Ayok Deng, one of Loreto’s recent graduates – had expressed the desire to train to be a doctor.

Though she was one of the top students to graduate from Loreto in 2015, she lacked the means by which to embark on a course of study to become a doctor.

So Claire Ayok Deng took advantage of the Loreto Professional Internship (Gap Year) programme funded by CRS, where she worked as a nursing assistant, providing valuable experience and an opportunity to search for scholarships to pursue her elusive dream.

In the educational sphere, the Loreto Primary School in Rumbek caters for almost 700 students, both male and female.

Students are guaranteed to have clean water, nutritious meals, access to health care and a quality education.

The Loreto Secondary School is an all-girls’ boarding school, where students are educated in social and life skills as well as receiving a full academic tuition.

Currently, 240 girls attend the school, and the demand for places is increasing as principal Sr Orla Treacy works with families to protect young women from enforced marriage. Additional graduate programmes offer these young women the best possible start in life.

Having visited Rumbek earlier this year, Fr Alan Neville MSC highlighted the need for funded scholarships which will allow pupils to study in a safe, secure environment, with three nutritious meals per day.

With additional internship and vocational opportunities offered by the Loreto Rumbek Schools, these young women will be able to benefit from a fully-rounded education that will provide them with the best possible start in their lives.