Liam Casey, President of the SVP East Region, described the donation as “an imaginative yet practical way to help many families in need.” 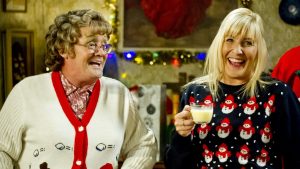 Comedian Brendan O’Carroll and his family have donated 2,800 Christmas dinners to the Society of St Vincent de Paul (SVP).

The donation will enable the SVP to provide 2,800 families in Dublin, Kildare and Wicklow with Christmas dinners. The charity says it will have dealt with 65,000 calls for help in the region by the end of the year.

The SVP has thanked Brendan O’Carroll and his family for their donation. Quoting President of the SVP East Region Liam Casey, the SVP website states that “The continued generosity of Brendan is unbelievable. It is an imaginative yet practical way to help many families in need. Our volunteers know that the families who benefit from his generosity not only appreciate his action but take extra pleasure in knowing that it comes with the compliments of Mrs Brown, an iconic and internationally famous Dublin mother.”

Mr Casey said that the resources of the SVP are “fully stretched” and that it welcomes all donations, “whether financial or in the form of goods which can either be distributed directly to those in need or sold in our Vincent shops.”

He commented on the generosity of members of the Irish public and said that the SVP is “dependent on them to continue their support into the future.”

The SVP is one of the most well-known charitable organisations in Ireland. Its goal, as stated on its website, is “to fight poverty in all its forms” through practical assistance to people in need. It offers “direct, personal assistance that is non-judgemental and based on the need of the individual or family.” An important part of its work involves person-to-person contact with those who contact the society for help. This includes visits by volunteers who offer a listening ear as they see what help or information they can offer the individual or family.

The society points out that even in an economy that is improving, “it can still take just one small problem to tip someone into crisis and poverty. But we know that a little help at the right time can change everything.”

The society can be contacted online or through its regional offices.

Donations to the SVP can be made on www.svp.ie.