Movie on Sister Clare Crockett sells out in Derry cinema 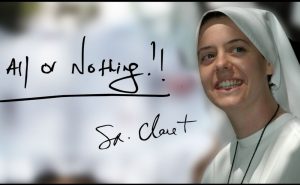 A powerful movie about the life of an Irish nun who died in an earthquake in Equador premiered in Derry on Monday to a rapturous response.  All or Nothing tells the story of Sr Clare Crockett, who entered the Servant Sisters of the Home of the Mother in 2001, aged 18.

From 2006 she lived in their communities in Spain, the USA and Ecuador. She died during an earthquake in Playa Prieta, Ecuador on 16 April 2016.

The movie premier took place in the town of her birth – Derry (at the at Brunswick Moviebowl) – on the second anniversary of her death. At the end there was a standing ovation. Two days later, such was the demand to see the movie, that three additional screenings had to be laid on in the 300-seater theatre. By the end of the day, over 1,000 people had watched All or Nothing.

Speaking to CatholicIreland.net, the editor of the movie Sr Kristen Gardner, who is American but based in Spain, said that it was a moving experience to see how well the movie was received in Derry. “Above all what moves me is to see how Sr Clare’s story is able to touch so many hearts and I think being here in Derry was especially beautiful to see how she can bring so much hope to the young people.”

Clare Crockett had always wanted to be a great Hollywood actress. Aged 14, she began to land acting roles, hosting a Nickelodeon programme at 16. But even when she landed a small role in a feature film, she was not happy. “Neither success, nor fame, nor human love could fill me. I knew that only by doing what God wanted could I be truly happy,” she recounted. Following a greater call, she entered religious life.

At the premier on Monday evening, the Servant Sisters spoke briefly before and after the movie, and then invited others to come up to give testimonies. “But most people were crying afterwards so it was hard for them to speak. It was really emotional,” said Sr Kristen.

On Tuesday (17 April), the Sisters showed the movie at Sr Clare Crockett’s secondary school and addressed the students afterwards. On Wednesday (18 April), a further screening at the Brunswick Moviebowl sold out immediately, causing the manager to lay on a total of four screenings –  two at 4.00pm and two more at 6.00pm. The first three screenings were completely full.

All or Nothing was entirely produced by the Servant Sisters, who began collecting video and other archive material of Sr Clare from the summer of 2016. Then they interviewed over 100 people, and in July 2017, Sr Kristen began editing the film. An Irish nun from Sligo, Sr Karen, wrote the music. It took Sr Kristen, who has produced shorter documentaries for the order’s small TV channel in Spain, six months to edit All or Nothing.

Demand is high for the movie, which is available on request from https://www.sisterclare.com. By last Sunday, there were over 300 requests for it, but Sr Kristen believes “a lot more have arrived this week with the premier and the launch.”

Sr Clare Crockett died with five postulants as she taught them guitar. On the first anniversary of her death, the Servant Sisters established their first convent in Ireland in Roscommon. The Servant Sisters are hoping to produce a short documentary on another of the girls who died in the earthquake – 15-year-old Valeria. “She has an amazing story of forgiveness, as she saw her father kill her mother when she was just two,” said Sr Kristen.