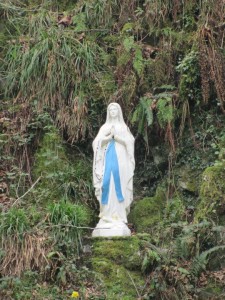 A week of celebrations are taking place in Mount Mellary in Co Waterford this week to mark the 30th anniversary of the apparitions which took place at the Grotto there over nine consecutive days from 16 – 24 August 1985.

The apparitions were witnessed first by 16-year-old Ursula O’Rourke who was visiting the recently developed Grotto with her family during the afternoon of 16 August 30 years ago.

It was a place to which the family had often gone to pray and to say the Rosary together.

Speaking about her experience in the official Grotto leaflet, Ursula said that as she was leaving the Grotto on that summer’s evening she looked up and noticed the statue was moving.

She said, “The statue of the Blessed Virgin stood there, her gown blowing as of in the wind. Her hands were joined in prayer, and her head moved in a very slow reverent movement. North, South, East and West, the green shrubbery around her spun. It formed a very dark green, which made Our Lady shine brightly.”

She said that Our Lady spoke of how God was angry with the world and how we must change. If we don’t change, then she said, “The devil would take over God’s Church in ten years”.

The part of Our Lady’s message which is consistent throughout those nine days was prayer. In Her own words: “My Message is peace and prayer and no more fighting in the world”.

In subsequent days the happenings at the Grotto would also be witnessed by local farmer Micheal O’Donnell and by a number of other locals including Tom Cliffe, 12 years old and his cousin, Barry Buckley, 11 years old, who claimed to see the Virgin each night over the course of five days.

As the days passed people came from all over the country to see the Grotto including a number of buses from Northern Ireland during the Troubles to pray for peace.

Indeed such were the visits that Waterford County Council, local Gardaí and the Civil Defence had to put a special traffic management plan in place for the area.

Now to remember these events, prayers and a candle light procession will take place each night at the Grotto until 24 August.

On Saturday 22 August an all-night vigil will commence at the grotto at 6am and continue until 6am the following morning.

On Monday 24 August there will be prayers at 8pm and events will conclude with a special blessing for the sick at the grotto.

Melleray Grotto is located one mile below the Cistercian Monastery of Mount Melleray in the Knockmealdown Mountains in Co Waterford.

The Cistercian monks of the strict observance (Trappists) came to this area in 1832. They set up the Grotto in 1982.

High on the cliff face is set a statue of Our Lady of Lourdes, which is the site of the apparitions.

By the side of the Grotto flows the small Monavugga River. The statue of Bernadette was placed near the stream.

Three benches and kneeler were placed in semi-circle around the statues.

After the events, some improvements in the site were made. Nowadays, the area reserved for devotion is still relatively small and capable of accommodating only about 150 people.