Jubilee pilgrimage began in Limerick on the 4 April 2016 and the icon is currently travelling to every cathedral in the Irish Church’s 26 dioceses. 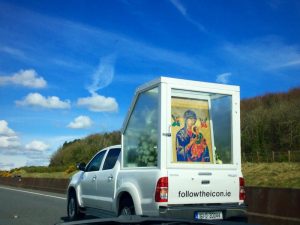 The Icon of ‘Our Mother of Perpetual Help’, which is travelling all over Ireland, was honoured on Tuesday on the 150th anniversary  of its arrival at the Church of St Alphonsus in Rome and its restoration to public veneration.

“This is a day of great joy, hope and celebration for us,” stated Fr General Michael Brehl, CSsR, in a special message for the anniversary on Tuesday 26 April.

“For 150 years, ‘Our Mother of Perpetual Help’ has accompanied us in our mission and our ministry, drawing countless people into a deeper personal relationship with Jesus the Redeemer, and with the People of God.”

“From St Alphonsus Church on via Merulana this devotion has spread to every continent, and thousands upon thousands of Churches, parishes, chapels, communities,” Fr Brehl stated.

He added that for Redemptorist missionaries following in the footsteps of St Alphonsus, love for Mary, the Mother of Mercy, has always been a hallmark of the Congregation of the Most Holy Redeemer.

“It was only natural that she would desire to be honoured in our Church under this title of Perpetual Help, and that she would continue to accompany and further our mission across the world,” said Fr Brehl.

The Jubilee pilgrimage began in Limerick on the 4 April 2016 and the icon is currently travelling to every cathedral in the Irish Church’s 26 dioceses.

It was spotted by eagle-eyed listeners of the Joe Duffy’s Liveline radio programme and Fr Michael Cusack explained to listeners the background to the Icon.

The Icon touring Ireland was written in Poland specially for the 150th anniversary and blessed by Pope Francis during Holy Week.

It is not the original Icon which cannot leave Italy by law. It is carried in a glass case on an adapted truck, which some people have likened to the ‘popemobile’.

“(It travels) with the message to be people of the gospel,” Fr Cusack said.

Catherine Corless, who was involved in uncovering the Tuam babies scandal, stated that the image of Madonna and child is a paradox at a time when the mother and child homes in Galway are being investigated.

Many women who were in these institutions still feel hurt and damaged and that nobody is helping them, she said.

Fr Cusack responded that in his work with Redemptorist missionaries, “We have had to be a people who have listened to those who have suffered and try to stand with people, hear their story, try to get action for them and call out for justice.”

However, Catherine Corless said that more consultation could have been made with survivors as they have been upset and offended in recent days.

“There is no offence intended, that does not come into any part of it. It is celebrating the faith of the people,” said Fr Cusack.

“When you put one (the celebration of faith) against the other (the hurt of survivors) you are into a great contradiction. But that has been the case of the Church over the last 20-30 years. There is no way that you could possibly justify any of the actions that have caused offence or hurt or pained a number of the population that Catherine represents.”

Others phoned Liveline to express their faith and devotion to Our Mother of Perpetual Help and to thank the Redemptorists for bringing the Icon to Ireland.

Fr Seamus Enright CSsR, Rector of Mount St Alphonsus in Limerick, and Chair of the 150th Jubilee celebrations, explained the history of the Icon in an article in Reality magazine.

Blessed Pope Pius IX presented the Icon of Our Lady of Perpetual Help to the Redemptorists for veneration in their newly-built Church of Sant’Alfonso in December 1865.

“It was much in need of restoration so it was April 26th 1866 before it was solemnly installed there. The Holy Father gave the Redemptorists a mandate: they were to promote devotion to Our Lady of Perpetual Help throughout the world. Just over a year later, the first copy arrived in Ireland,” he explained

In his address at the launch of the Jubilee pilgrimage, Archbishop Diarmuid Martin said that icons are more than photographs, they are impressions to lead people in contemplation into the mystery of God.

An icon speaks to the heart and evokes prayerful reflection, the Archbishop said, and that is why the image of Our Mother of Perpetual Help has touched hearts all around the word.

Full programme of jubilee events can be found at: www.followtheicon.ie  and see www.rednuns.com