Home > Featured > Mother Kevin: a cause for celebration

Mother Kevin: a cause for celebration 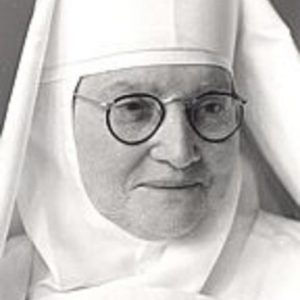 There is great delight in Arklow and Dundalk with news of the launch of the cause to have an Irish-born missionary, Mother Kevin, declared a saint.

The cause was officially launched on Sunday 6 November, the Feast of All Irish Saints and the Feast of All Africa Saints, at a Mass of Thanksgiving in Kampala Cathedral, where Mother Kevin and two other missionaries, Fr Mapeera Lourdel and Brother Amans were declared ‘Servants of God’.

Mother Kevin died in 1957, so much of the investigation into her life will be based on documentary evidence, but there are a few still alive who met her and knew her, and they will be interviewed as a matter of course.

“There are people who met her when they were in the novitiate in Scotland, in England and in Boston, who can talk about what she was like,” said Sr Cecilia Sweeney of the Franciscan Missionary Sisters of Africa (FMSA), one of two orders founded by the Wicklow woman.

The headquarters of the FMSA congregation, which was founded in 1952, is in Mount Oliver in Dundalk, but an even bigger legacy is the African congregation founded by Mother Kevin in 1923 – the Little Sisters of St Francis – which has more than 550 members. The FMSA has about 100 members, more than a third of whom are retired or semi-retired, but new members are joining the order in Africa, with six or seven young women expected to join the novitiate this year.

Between them, the two orders are active in Uganda, Kenya, South Sudan, Zambia and Zimbabwe. They are involved in rural development, education and healthcare. Indeed, while there are many hospitals named after saints, in Uganda the local word for a hospital or a charitable institute is ‘Kevina’, derived from the name by which Mother Kevin is commonly known: Mama Kevina.

Sr Cecilia, who is involved in producing a new prayer card featuring an intercessory prayer to Mother Kevin, says that the Irish woman made a profound impression on the people with whom she worked in Africa. “When I started as a young missionary many years ago, when I went into the classroom there were girls called Kevina sitting in the desks in front of me. During the Second World War, there was a supply plane named after her, The Mama Kevina.”

When she died in Boston in 1957, Cardinal Richard Cushing, who described her as ‘the greatest missionary of the 20th century’, paid for her body to be returned to Ireland. But she was disinterred and reburied in the grounds of the Little Sisters’ Mother House in Uganda following an appeal from the people there, with Muslims and Sikhs among those contributing to the fund organised to bring her remains back to Africa.

“They are all professional craft stalls and it is a great event,” said Anna Kearns of the Mother Kevin Group. “They pay us rent, we serve teas and coffees and we have a raffle and that is how we raise funds. Last year, we made €2,200 which was used to buy land to grow ground nuts and other crops. Our group started out of a justice and peace project that was held in the parish. Of course, we are very pleased with the news. She is a great example for young people.

“Things are busy now here with the run-up to Christmas and the work on this craft fair, but in the New Year we shall have a special mass in Arklow to celebrate the launch of Mother Kevin’s cause.”

For more information about Mother Kevin, see http://www.fmsa.net/index.php?option=com_content&task=view&id=17&Itemid=16 or https://www.catholicireland.net/mother-kevin-a-prophetic-woman/.