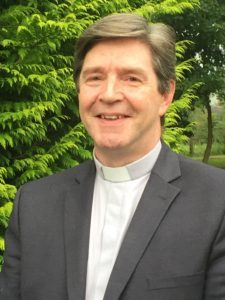 Following the acceptance by Pope Francis of the retirement of Bishop Liam MacDaid as Bishop of Clogher last weekend, the Diocesan Chapter, acting as College of Consultors, met this week in Monaghan.

In accordance with its rights and duties under Canon Law, it elected Monsignor Joseph McGuinness as Diocesan Administrator. Monsignor McGuinness is the Diocesan Secretary, Chancellor of the Diocese and Administrator of the Parish of Tyholland. He takes up his new responsibilities immediately.

The Diocesan Administrator will have responsibility for administering the day-to-day affairs of the Diocese until a new bishop is appointed by Pope Francis. In his role as Administrator he will also attend meetings of the Irish Bishops’ Conference.

Speaking after the meeting, Monsignor McGuinness said that he was conscious of how much the wisdom and compassion of Bishop MacDaid’s leadership would be missed by the priests and people of the diocese. He said that he “felt honoured to be asked to take on the role of Diocesan Administrator’’ and would do his best to serve the Diocese until the new bishop is appointed.

He thanked and paid tribute to Bishop MacDaid for his dedicated service over the past six years. “It has been a privilege for me to have worked with Bishop MacDaid, to have learned from his example of generous service, and to have benefited from his great kindness and support. I wish him happiness in his retirement and pray that he will have good health and every blessing in the years ahead, ” he said.

Monsignor McGuinness thanked the Chapter of Canons for their support and good wishes, and asked for the prayers of the priests and people of the diocese in the time ahead.

Monsignor Joseph McGuinness is a native of Lisnaskea (Aghalurcher parish), Co Fermanagh. He was educated at St Michael’s College, Enniskillen, Queen’s University Belfast and St Patrick’s College, Maynooth before being ordained a priest in 1984.

He pursued postgraduate studies in liturgy and sacramental theology at the Institut Catholique in Paris, and completed teacher training in St Mary’s University College, Belfast. He was appointed to the staff of St Michael’s College in Enniskillen as a teacher of religion, science and music in 1988.

He was President of the College from 2000 until 2006, after which he was appointed Parish Priest of Enniskillen in 2007. In 2010 Bishop MacDaid appointed Monsignor McGuinness as Diocesan Secretary, Chancellor of the Diocese and Administrator of the Parish of Tyholland, Co Monaghan.