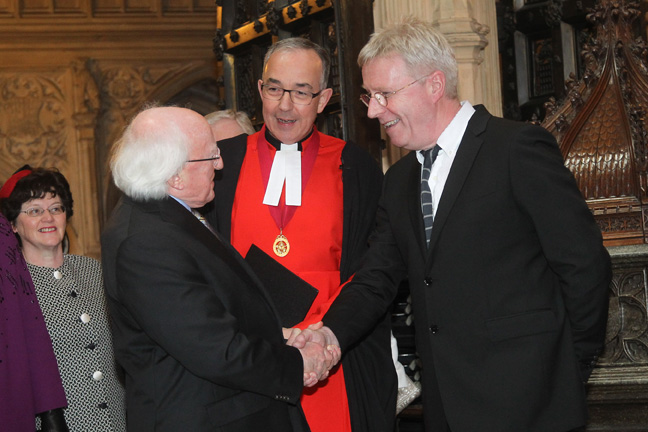 President introduced to artist Hughie O’Donoghue by Dean of Westminster

An artist who draws inspiration from his mother’s native Mayo, and the administrator of the Catholic Westminster Cathedral were among those who met the President Michael D. Higgins and his wife, Mrs Sabina Higgins, on their visit to Westminster Abbey on Tuesday.

At the Abbey, the President observed a moment’s silence and laid a wreath at the Grave of the Unknown Warrior.

This solemn and silent act was in contrast to the earlier pageantry and was highly symbolic in paying tribute to all those who fought in World War I, but especially those Irishmen who where shunned because they chose to fight on Britain’s side.

President Higgins and his wife Sabina also paused and bowed their heads at a plaque dedicated to Louis, the Earl of Mountbatten, the Queen’s cousin, who was killed by an IRA bomb.

Prayers were said for the people and Government of Ireland and of the UK. Then the President and his party took a tour of the historic Abbey, taking in the Lady Chapel.

There, the President met Hughie O’Donoghue, the artist who designed two stained glassed windows to coincide with the Queen’s jubilee. The panels are laid out in the gothic fashion, to be read from the base up to the heavens.

O’Donoghue has incorporated religious emblems — stars, the fleur de lis and the lily — to represent the Blessed Virgin Mary.

Hughie O’Donoghue has stated that the terrain of Erris, Co Mayo, has informed his paintings for three decades. 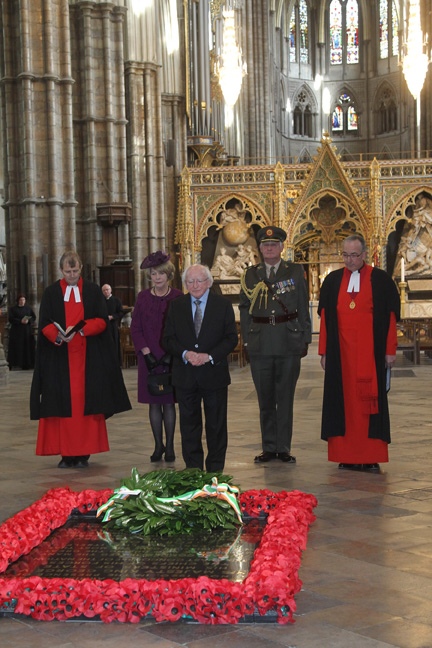 His mother came from Erris and although he was raised in Manchester, he was a regular visitor to Mayo.

Kilkenny was home for 15 years, while his children attended school.

The President welcomed by the Dean of Westminster, the Very Rev Dr John Hall, and members of the Chapter.

The Dean introduced members of the College of Westminster Abbey, and Canon Christopher Tuckwell, administrator of Westminster (RC) Cathedral as well as the Rev Martin Turner, Superintendent Minister of Methodist Central Hall Westminster.

On the last day of the official visit, the Irish President and Mrs Higgins will visit Coventry Cathedral.

During the tour of the cathedral they will meet denominational representatives in the Chapel of Unity.

The Chapel of Unity brings the Church of England, Catholic and the Free Churches together for Christian service in Coventry, and was born out of the sufferings of war and the ecumenical enthusiasm of the church leaders.

The President and Mrs Higgins will also visit the ruins of the old cathedral.

Separately, it has emerged that President Higgins is not the first Irishman to be honoured in Windsor Castle.

Another Irishman is honoured in St George’s Chapel, the royal chapel on the grounds of Windsor Castle.

A memorial plaque in the north choir aisle commemorates the life of Fr Thomas Ryan SJ.

It reads: “Remember with prayer and praise THOMAS RYAN, 1889-1971, who for thirty-eight years served his Lord in Hong Kong as priest of the Society of Jesus”.

According to Fr Ryan’s biographer, Fr Todd Morrissey SJ, Fr Ryan was “a man of immense energy, with a strong commitment to social justice, [who] combined religion and dedication to the poor in Ireland, China and Hong Kong.”

Both as a Jesuit and as a head of a government department in Hong Kong, Fr Ryan was deeply committed and immensely hard-working.

He was devoted to the Chinese people, and one of his Chinese friends was responsible for arranging to have his life commemorated at Windsor. For the full story of this remarkable man, see Fr Morrissey’s biography.