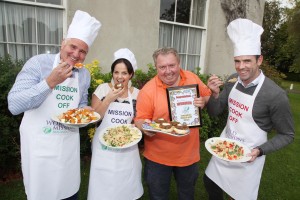 Donal Hayes from Kinsale, Co Cork was chosen from five finalists who were challenged to cook one meal for six people for €5.

The initiative was aimed at raising awareness of hunger in the developing world and Missionary Children’s one million dinners appeal.

Jackie Pallas, National Secretary of Missionary Children, said they were looking for people to devise tasty, nutritious food for a family of six.

“I know this is no mean feat but there are so many ways in which food can be imaginative.”

She said it was also a way of drawing attention to the huge global injustice that sees so many people die from food poverty every day.

“Millions of people are going to bed hungry every night and millions more are dying from hunger.”

“While €5 may indeed be a very limited amount for people in this country, despite our own economic difficulties, it is a lot of money for impoverished families in so many parts of the world.”

The theme for this year’s Mission Month is ‘That they may have life’…life in all its richness and dignity.

For further information or to make a donation please visit www.wmi.ie