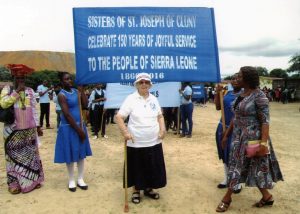 ‘Reach Out and Spread the Joy’ is the theme of Mission Month which runs until the end of October with the aim of raising awareness about the evangelising work of Irish missionaries abroad and raising funds to support their work.

Over the course of the month, World Missions Ireland (www.wmi.ie) is hosting a number of initiatives to highlight missionary activity. These include:

On World Mission Sunday, RTÉ will broadcast a television and a radio Mass at 11am celebrated by Archbishop Kieran O’Reilly SMA, chair of the Bishops’ Council for Missions.

The Mission Sunday collection is one of three papal collections. Donations support churches, hospitals, schools and vocations in countries where the Church is young or poor.

At their autumn general meeting, the Bishops encouraged the faithful to support this year’s Mission Sunday collection and other WMI activities.

Separately, last weekend at the Faith and Life Convention in Belfast, Cardinal Kevin Farrell, Prefect of the Dicastery for Laity, Family and Life, told up to 500 delegates that Pope Francis had spoken to him last June about the contribution of Irish missionaries.

According to Cardinal Farrell, the Argentinian pontiff recalled having Irish priests in Buenos Aires and he also noted that the Irish Church had sent missionaries all over the world, christianising parts of Africa and parts of Latin America.

“We need to ensure that they are part of the revolution of promoting marriage and family life,” Cardinal Farrell recalled the Pope saying.

Meanwhile, yet another Irish missionary has received a prestigious international award in recognition of their tireless work on behalf of the world’s most disadvantaged.

Sr Teresa McKeon of the St Joseph of Cluny congregation and a native of Streamstown, Co Westmeath, has been honoured by the President of Sierra Leone for her “dedicated and meritorious service to the state in the field of education and the development of women”.

She was presented with the award of “Officer of the Order of the Rokel” by President Koroma at a ceremony at State House in Freetown.

Sr Teresa has ministered in Sierra Leone since 1954 serving as teacher, school principal, provincial leader of her congregation in West Africa, and in development work with rural women in Dambala near the city of Bo.

When the civil war broke out in 1994 she and her congregation had to flee the country. She then moved into neighbouring Guinea where, until 2001, she worked with Sierra Leonean refugee women, children under five years, and young girls in five refugee camps.

On returning to Sierra Leone in 2001, she supported returnees in displaced camps in Lumpa. In 2002, she continued working in the Kono region for the development of rural women through practical training in basic business and loan management, awareness education in different facets of life, education of poor and marginalised children, and training lactating mothers to recognise the nutritious value of local foods in the diet of their babies.

Although now in her late 80s, Sr Teresa is still active helping to develop the capacity of teachers in the school at Koidu.

On receiving the award, Sr Teresa commented, “Surprised to receive this national award for just doing the work I was destined to do in God’s plan for me, I humbly accept it not for myself but on behalf of all the Cluny Sisters who have ministered in Sierra Leone, and our families and supporters who have made possible our efforts to help and to empower our beloved people in this beautiful country”.

The Cluny Sisters have given service to the people of Sierra Leone since 1866 in the fields of education – especially for girls – health and women’s development using the distinctive missionary holistic approach that fosters the total person and their dignity.

Another Irish member of the congregation, Sr Mary Sweeney from Dungloe, Co Donegal, was given a Presidential Distinguished Service Award by the Irish Government last year recognising her long service to education for the hearing impaired at St Joseph’s School in Makeni.

The education system at all levels in Sierra Leone is low quality with inadequate training for teachers. The Cluny Sisters have now partnered with Irish-based Global Schoolroom in an innovative 3-year pilot programme to develop the capacity of 130 teachers in Makeni and Kono.

This programme – grant aided by Misean Cara and accredited by UCD – commenced in July and will produce a template for teacher professional development and in-service for integration with the state education infrastructure.

The impact of this programme will be to create a cohort of knowledgeable, professional and expert teacher tutors who will develop the skills to initiate professional development in their schools and surrounding districts. Sr Teresa sees this as a most encouraging initiative with potential to radically improve the quality of teaching in schools.

The recognition awards of the Government of Sierra Leone are equivalent to the OBE/CBE of the United Kingdom, and in fact replaced them when the country became a republic in 1961.

Another Irish missionary, Sr Dr Hilary Lyons of the Sisters of the Holy Rosary was awarded Commander of the Rokel Award in 1984 recognising her contribution to medical health care especially at a hospital she developed at Serabu and for her 42 years of ministry in Sierra Leone.