The mission goes on as Mother Teresa is canonised in Rome 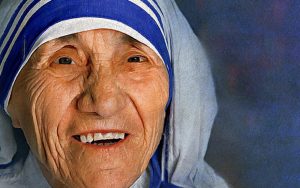 It’s not every day that an order has its founder canonised.

But canonisation or no canonisation, the work has to go on and so when Mother Teresa of Calcutta is declared Saint Teresa of Calcutta tomorrow (Sunday), the Missionaries of Charity in South Circular Road in Dublin will be serving up the breakfast they provide each week for some of the less fortunate of the area.

“The canonisation is in the morning so we will be doing breakfast. We will just look at it [on the television] with them,” said Superior of the convent, Sr Edward.

Each Sunday the sisters have a ‘soup kitchen’ at the convent which provides Sunday dinner to between 40 and 50 people. This Sunday they will celebrate mass at 3pm followed by a special celebratory dinner.

There are over twenty Missionary Sisters of Charity in Ireland in four houses – Dublin, Blarney, Armagh and Sligo.

In Dublin and Armagh the sisters run a temporary hostel which men can stay in for three months as they seek permanent accommodation.

In Blarney, the Missionaries of Charity run a rehab house for addicts who have come off drink and drugs and seek rehabilitation. The convent in Sligo is part of the Contemplative branch of the Missionaries.

“They pray more and people come and pray with them and can stay for a day or two if  they want a retreat,” Sr Edward explained.

In the order, Ireland and Britain form one region, which will be represented at the canonisation service by two sisters both of whom are based in England: Sr Ann from Poland and Sr Christy Paul from India.

Sr Edward is from Cork and joined the order thirty years ago.

As a student she met Mother Teresa a few times while in formation in Rome. “She would come and talk to us. She was a small little lady but very powerful, very charismatic.”

The Missionary sisters are overjoyed about the canonisation.

“I knew it would happen eventually. I’m delighted it was so soon. It is good for people, so many have great devotion to her,” said Sr Edward.

“Mother Teresa loved Jesus. She did what He asked her to do and she helped people. She pointed them to Jesus.  He is the way to have peace and tranquillity in your own personal life,” she added.

For nearly 50 years, Mother Teresa endured what the Church calls a “dark night of the soul” .

Sr Edward points out that many great saints go through this dark night.

“It is a purification to come closer to Jesus – it’s a privilege I suppose,” she said. And her hopes for the future of her order are simple: “That we will continue to follow in her [Mother Teresa’s] footsteps and do what she wants us to do and lead people to Jesus.”

Pope Francis will celebrate the Mass of canonisation in St Peter’s Square on Sunday, the eve of the 19th anniversary of Mother Teresa’s death.

There are 5,000 Missionaries of Charity – sisters, brothers, priests and co-workers – in their 700 convents worldwide.

In a statement released in advance of the canonisation, the Primate of All Ireland, Eamon Martin said that Mother Teresa was a “champion of the poor and continues to be a source of inspiration to all of us, especially during this Year of Mercy we are celebrating at the invitation of Pope Francis.”

Archbishop Eamon Martin will celebrate a Mass of Thanksgiving on Monday 5 September for “the Church’s newest saint” at St Malachy’s Church, Armagh at 7.30pm.