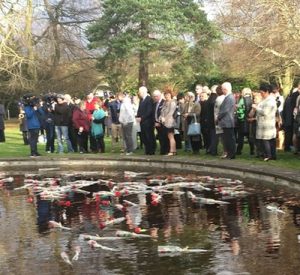 A commemorative ceremony on Wednesday (6th December) in Farmleigh, Dublin, recalled the more than 9,000 people who are reported missing to the Gardaí every year. The ceremony included musical and personal tributes by some family members, including Patricia O’Reilly who spoke about her mother, Alice Clifford, who suffered from dementia and went missing from a Dublin hospital in 1979.

This year’s theme focussed on DNA matching, a technique which just days earlier, helped to identify the remains of a man missing since 2006.

Joe Gerard Reilly disappeared from Dublin in December 2006.  His body was washed up on Rockmarshall Beach in Louth six months later. Local people buried the remains as a ‘John Doe’ in Lordship Cemetery. In May of this year, brothers of Mr Reilly were asked to donate DNA samples and through this, Mr Reilly’s remains were identified.

“This is not the first time that this has happened and raises serious questions about how missing persons files were checked in the past,” said Fr Aquinas Duffy who set up the website www.missing.ie in 2000, following the disappearance of his own cousin, Aengus Shanahan. “While it is wonderful that the Reilly family have now learned what happened, and have a grave to visit, so many other families may be wondering if their loved one is also buried in some cemetery as a Jane or John Doe.”

Fr Duffy, whose website www.missing.ie attracts around 10,000 views a month, said he gained comfort from the fact that a new unit in Harcourt Street was looking into cold cases and “joining up the dots. That is a good thing”.

The number of people going missing has risen sharply since 1999 when the figure was just under 2,500.  Ten years later it was almost 8,000 (7749), rising to almost 10,000 in 2016 and 2017. The vast majority turn up safe and well.  Reasons for disappearances are varied.  “Some can be foul play, others due to mental health issues and others dementia,”  Fr Duffy told CatholicIreland.  The largest number are teenagers who go missing for a weekend or a week and then turn up ‘safe and well’.  Often the same young people go missing again and another appeal goes out months later.

Fr Duffy believes there is a great need for an educational programme in schools, perhaps run by the Missing Persons Helpline, to explain that there are other ways to deal with stress than disappearing.  “If young people realised the distress it caused their families they would not do it. There is an educational component needed here,” he said.