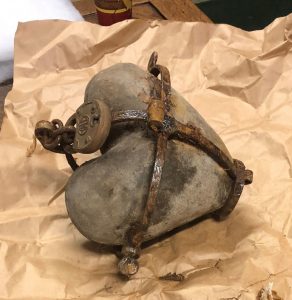 Safe at last: Reliquary containing the heart of the patron saint of Dublin, St Laurence O’Toole.

A stolen 800-year old relic, the heart of St Laurence O’Toole, has been recovered by the Gardaí undamaged and last night was officially handed back to Christ Church Cathedral.

The relic, the saint’s heart inside a wooden heart, encased within a small iron-barred cage, was stolen from Christ Church Cathedral in March 2012.

The thief hid in the cathedral overnight and stole the relic, lighting two peace candles on the Trinity altar, before making away with the priceless “treasure”.

Two Garda superintendents received credible intelligence regarding the whereabouts of the relic in the last two weeks and it was located in the Phoenix Park.

Speaking on RTÉ, the dean of the cathedral, the Very Revd Dermot Dunne, said the recovery of the relic was “absolutely incredible and very exciting”.  He had been “so dejected” over the theft, “but I kept up hope and I believed the Gardaí would keep on the case and they did and I’m delighted with the news.”

At 6.00pm last night, Assistant Commissioner of the Gardaí Pat Leahy handed over the relic to the Church of Ireland Archbishop of Dublin, Most Revd Dr Michael Jackson, at a service of Choral Evensong in Christ Church Cathedral.

The Dean said that he was planning to build a proper shrine to St Laurence where the saint’s heart (which is intact) could be viewed but would be safe. He hopes this will be ready for the saint’s feastday on 14 November.

“The return of the heart of Laurence O’Toole to Christ Church Cathedral brings great joy to the people of Dublin as Dubliners,” commented Archbishop Michael Jackson. “For those of us associated with the life of the dioceses, it brings again to the fore the close relationship between Glendalough and Dublin, a relationship of more than 800 years. Laurence left the monastic city of Glendalough of which he was Abbot to become Archbishop of Dublin, hence cementing a vibrant relationship that continues unabated to this day,” he stated.

A detail of an icon to St Laurence O’Toole in Kilmacud Parish Church.

Laurence O’Toole is the Patron Saint of Dublin. Formerly the Abbot of Glendalough, he was appointed second archbishop of Dublin in 1161 and was consecrated the following year at Christ Church Cathedral.

The Anglo-Norman invasion of Ireland, led by Strongbow in 1169, resulted in two sieges and a famine in Dublin. Laurence played an important part in defending the city, encouraging his congregation to resist the enemy and helping the wounded.

He played an important part in the negotiations when an Anglo-Norman victory became inevitable, according to the Education Department of Christ Church Cathedral.

He has traditionally been given credit for the rebuilding of Christ Church in the 1180s, although it is now considered more likely that his successor Archbishop John Cumin was responsible.

In 1180 Laurence left Ireland for the last time to travel to Normandy after Henry II, for whom he was a trusted mediator. However, he became ill on arrival and was brought to the Abbey of St Victor at Eu where he died on 14 November 1180.

He was made a saint in 1226. Following Laurence’s canonisation, some relics of his were returned to Dublin, where they lay in the cathedral’s relic collection until the Reformation. The heart had been on display in the Chapel of St Laud in the cathedral until it was stolen.