Hospitality ministry aimed at English-speaking pilgrims who take part in the Camino.

A new ministry of hospitality at Santiago de Compostela aimed at English-speaking pilgrims is being operated by a number of Religious from Ireland.
Priests and religious from the La Retraite Sisters, the Faithful Companions of Jesus, the Society of the Holy Child Jesus, the Redemptorists and the Missionaries of the Sacred Heart are working together to welcome pilgrims to the Cathedral at the end of their Camino.
The ministry of hospitality was opened this month at the request of the Dean of the famous Cathedral of St James and the Pilgrims’ Office.
It offers pilgrims a space for reflection and meditation, the celebration of Mass, opportunities for reconciliation and a much-needed coffee. 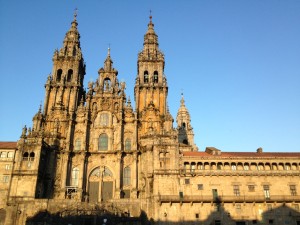 It also offers them space to begin to reflect on and integrate their experiences before they return home. It gives an opportunity to step away from the hustle of the city to find time for stillness and peace.
The ministry is part of the new multicultural programme of hospitality encouraged by the Cathedral and the Pilgrims’ Office.
Last Saturday saw the biggest number of people pass through the Pilgrims’ Office this year when 2,465 Compostelas were issued.
Since the film ‘The Way’ was released in 2010, interest in the Camino has steadily increased.
People undertake the journey for a number of reasons. For some, the motivation is explicitly religious, responding to the invitation of pilgrimage through the ages.
For others it is a spiritual goal, where pilgrims take time to look at the priorities and direction of their lives. Whatever it is, the Camino is not undertaken lightly.
Fr Alan Neville MSC, Vocations Director with the Missionaries of the Sacred Heart, who is a member of the new ministry in Santiago spoke to CatholicIreland.net about people’s reaction to the Camino.
“I have yet to meet one person who hasn’t been profoundly changed by the experience for the better.”
“During my time walking the Camino over the last seven years, I’ve seen people on foot, bicycle, horseback and even once on a unicycle! There are people of all faith backgrounds and none. It’s an opportunity to share, to explore, and to grow in our understanding of God, others and ourselves.” 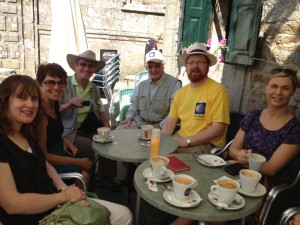 Earlier this year, as part of the MSC Vocations programme, he led a group of Irish pilgrims from the beginning of the Camino in Frances to Logroño.
“To describe the first three days of walking from the Pyrenees to Pamplona as rainy would be an understatement. However the character of the group, the welcome we received in the pilgrim hostels and the companionship of the Way meant that it didn’t dampen our spirits. We’ll walk another stage of the Camino Frances next summer.”
Santiago has typically been a place of rejoicing, but it has been touched with tragedy in recent weeks.
On 24 July, the eve of the Feast of St James, a high-speed train from Madrid derailed outside the city’s railway station causing the deaths of 79 people and resulted in many injuries.
According to Fr Alan, the sense of loss was palpable in the city. “When I arrived two weeks ago it was a city in mourning. Shops had a picture of the Galician regional flag emblazoned with a black ribbon. It was a community united in grief, but a city that rallied to support the victims and their families in whatever way they could.”
Santiago de Compostela he said was “a place above all of hope. Those who arrive in Santiago are all searchers. They are people who are looking for a way forward in their lives, whether it just taking some time out or looking for answers to the deeper questions.”
“Above the Puerta de las Platerías, the traditional exit for pilgrims from the Cathedral, the familiar symbols Alpha and Omega are inscribed in stone. They typically symbolise the beginning and end. Here however they are reversed as the pilgrim is reminded that as their Camino has finished in Santiago, their pilgrimage of faith through life continues. Buen Camino!” 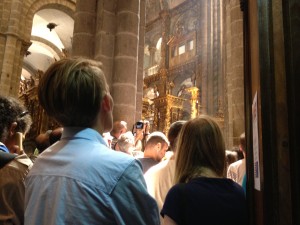 English Speaking Time Table
Sacrament of Reconciliation
(Confessional No 14 in the Cathedral)
9:00am – 10:30am
11:30am – 1:00pm
5:00pm – 7:00pm
Mass in Capilla de Soleded (in the Cathedral)
10:30am – Followed by coffee
Sacred Space/Reflection Room
Open throughout the day in the ground floor of the Pilgrims’ Office – Everyone’s welcome.
Fr Alan Neville MSC
Vocations Director
Missionaries of the Sacred Heart
www.mscvocations.ie