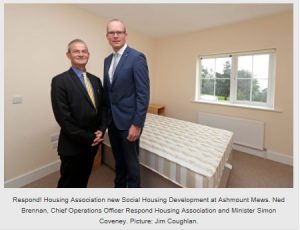 The Minister for Housing Simon Coveney has praised voluntary housing associations such as Respond! for the work they have done to develop social housing in Cork City.

A 130-home estate at Ashmount Mews in Cork City will, by the end of the year, have 34 social housing units, delivered through Nama’s social housing “special purpose vehicle”, which works with approved housing bodies, such as Respond! Housing.

Minister Simon Coveney recently visited the first families who are to move in under phase one of the scheme.

Once phase two is completed by December, the housing units will be home to 44 adults and 70 children.

Mr Coveney hailed the project as “an example for completing an unfinished estate and delivering social housing at the same time”.

Speaking this week Nama chief executive officer Brendan McDonagh said the agency has delivered more than 2,200 such houses and apartments for social housing since 2012.

“Individuals and families get access to high-quality housing, local authority housing lists are reduced, and properties that weren’t being occupied are brought into the use they were intended for, which is good for Nama and for taxpayers, and especially for the new occupiers,” he said.

“Our tenants will be alongside the wider Ashmount private development,” he said.

“All our tenants will have the benefit of our resident support workers to assist them in their new homes and to work with them in terms of improving their employment prospects and educational opportunities. That is the Respond! model — we are always there for our tenants whenever the need arises.”

He continued, “Respond! has ambitious plans for further development in Cork city and county, with about 240 social housing units at various stages of negotiation’’.