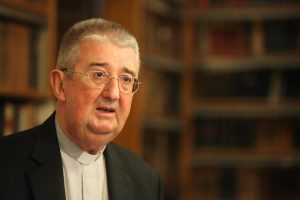 Minister for Culture, Heritage and the Gaeltacht, Josepha Madigan, has been accused by Archbishop Diarmuid Martin of Dublin of causing parishioners in her home parish and further afield “considerable distress”.

In a statement on Tuesday, the Archbishop took issue with Minister Madigan’s account of her role in leading a prayer service in the parish of St Therese, Mount Merrion last Saturday evening when no priest turned up to celebrate the 6pm Mass.

Speaking to RTE Radio’s ‘Today with Sean O’Rourke’ programme on Monday, Minister Madigan said she had offered to lead a prayer service for the packed church and that a Minister for the Eucharist had distributed Communion.

She said the Gospel was not read and no attempt was made to consecrate the bread and wine, as that can only be done by a priest.

The Minister, who is a member St Therese’s Ministry for the Word team, was prominent in campaigning for a Yes vote in the recent abortion referendum.

Ms Madigan told Sean O’Rourke she saw no contradiction between her stance in support of abortion and the fact that one of the Church’s core teachings is on the protection of human life.

“I would be of the view that God gave us free will. I believe it is for everybody to make their own choice notwithstanding the fact that abortion is not something that I would choose.”

She said the bigger issue was that the Church “should be ordaining women and it should optional for priests to marry. It is something that I will say to Pope Francis if I get an opportunity in August,” she said.

But on Tuesday, the Archbishop rebuffed her comments.

“It is regrettable that Minister Madigan used this occasion to push a particular agenda. Her expressed view that a mix up in a Dublin parish on one particular Saturday evening should lead to the Universal Church changing core teachings is bizarre,” the Primate of Ireland chastised.

According to Dr Martin, many people had contacted his offices to express their hurt and upset at the Minister’s comments.

“Minister Madigan might consider listening to the voices of those people who disagree with her public comments, she might consider the hurt she has caused to parishioners who deem her actions deeply disrespectful,” he said.

The Archbishop also said there was no shortage of priests in the Archdiocese of Dublin for the celebration of Sunday Mass.

“Due to a misunderstanding, the priest assigned to Mass in the parish of Mount Merrion on Saturday evening, failed to turn up.” He stressed that it was not correct to say that the Minister ‘said Mass’.” A reference to the headline in the Irish Independent which broke the story on Monday.

On Tuesday evening, Minister Madigan hit back at the Archbishop’s criticisms saying the only agenda she was pushing is equality.

“I am a member of the Catholic Church but if it is to be truly reflective of its people and address the shortage of clergy it should ordain women,” she said.

“I took the opportunity to highlight the inequalities I see in the Church in respect of women,” she added.

The Fine Gael Minister continued, “If Catholic Church is to be truly reflective of its people, it must ordain women. If the number of priests being ordained continue to decline, the Church is built on a foundation of sand and will crumble by the time the next generation grow up.”

“Although women play a major role in the day-to-day operations of the Church, including in my own parish, I believe the Church has to change to reflect society as it is today.”

“There should be more training for Ministers of the Word, into the future. That is not a criticism of the good work that volunteers of my parish do on a daily basis.”

The Minister also sought to clarify that she had never said that she “said Mass” – that was a newspaper headline. “We simply carried on with the service as best as we could,” she explained.

She challenged Archbishop Martin as to what advice he would have given her and her two colleagues last Saturday evening, would he have advised her to cancel the Mass?

Minister Madigan said she had received messages from hundreds of people, including people in her own parish, thanking her for what she said on radio.

“I am a member of the Catholic Church and my faith in God is integral to who I am. Therefore, I want my Church to be better, to be inclusive and listen. If the Church is to be truly reflective of its people, and if it is seeking an obvious solution to the shortage of clergy, then ordaining women is the answer. How is that not the Christian and right thing to do?”

“It simply confounds me that the Church has difficulty with this. I also believe that it should be an option for priests to marry if they so wish.  If I did not use this opportunity to highlight the inequalities I see in the Church, then I would be turning a blind eye. I am not prepared to do that.”

She concluded by saying that if she gets the opportunity in August she intends to raise these matters with Pope Francis.