Minister gives back car to SVP after draw win 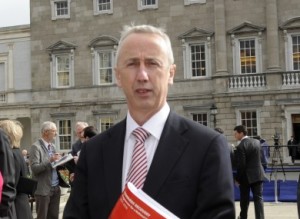 A Government Minister has been praised for his incredibly generous gesture in giving back a car he won in his local St Vincent De Paul draw to the charity.

Humphreys, who is a junior minister at the Department of Social Protection and a TD for Dublin South East, bought the ticket on Bloomsday in Sandymount.

The Minister was announced as the winner last week at Mass in St Mary’s Star of the Sea Church in Sandymount, but he decided to return the car after discussing it with his family.

Minister Humphreys said his two children are currently learning to drive and would have loved to use the car but are “happy enough to give it back”.

He added, “It was very much a family decision. It’s a very worthy charity, that’s why I bought a ticket in first place … We are very aware of the good work that St Vincent de Paul does and the flexibility they have to give people help.”

The SVP said the donation is very generous.

Liam Casey, President of the SVP East Region (covering Dublin, Kildare, Wicklow), said the gesture is particularly welcome at the moment as the area has significant funding issues, with calls for assistance up 6% this year.

“In addition to helping families with back-to-school costs during the past few months, our members are heavily involved in helping families struggling in emergency accommodation throughout the region in hotels and B&Bs.”

“SVP volunteers are seeking to help families with a range of practical issues that arise from living in cramped conditions and the uncertainty of where they might be living from week to week.”

He added, “With winter and Christmas approaching we are bracing ourselves for even more calls for assistance than last year and that is why the donation of his prize by Minister Humphreys is really appreciated.”