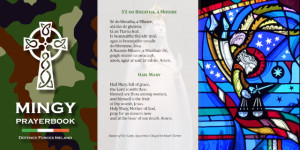 The chaplaincy service for the Irish Defence Forces this week launched a new prayer book app for military personnel entitled the ‘Mingy Prayerbook’.

The original Mingy Prayerbook was published in the early 1990s to provide personnel with prayers and reflections during training, and for various occasions through work and life.

The prayerbook was designed to fit in a soldier’s pocket of wallet.

Speaking about the new prayerbook app, Fr Robert McCabe of the Chaplaincy Service in Gormanstown Army Camp in Co Meath said, “The app contains multi-denominational prayers and reflections for army personnel and their families and colleagues whom we serve overseas.”

“Indeed military personnel serving overseas in Lebanon, on the Golan Heights, in Mali and in the Mediterranean have been provided with the new Mingy Prayerbook in recent months.”

Fr McCabe added, “The prayers in the Mingy Prayerbook have developed through moments of prayer, conversation and sacraments which chaplains have shared with their personnel. Moreover two of the prayers which are included have recently been promoted by Pope Francis. These are ‘Our Lady Untier of Knots’ and ‘Prayer for Our Earth’.”

Explaining how the prayerbook originally got its name Fr McCabe said, “Mingy is a unique Defence Forces word which grew up in the Congo on the first UN mission overseas.”

“The Irish soldiers would be patrolling the markets and would hear the word mingy, mingy, mingy, meaning we have plenty of fruit or sculptures. Mingy speaks to every member of the Defence Forces who have been overseas and their families.”

Two of Evie Hone’s windows from St Patrick’s Garrison Church in Cathal Brugha Barracks, Dublin and from St Michael’s Garrison in Collin’s Barracks in Cork City are featured in the prayer app.

Coupled with this the most recent glasswork by George Walsh taken from the Chapel in Finner Camp in Co Donegal and the only window in Ireland of a soldier wearing a ‘G-Shock’ watch are featured in the book.

The Mingy Prayerbook App is available at present in the iTunes store. The android version of the App is still at development stage with a view to being launched in the coming weeks.