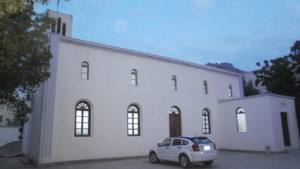 Church of the Immaculate Conception in Aden.

Church leaders in the Arabian Peninsula have requested prayers for Yemen, including its Christian communities, following the destruction of a Catholic church and the adjoining priests’ residence in the Al-Ma’ala area of Aden.

The Church of the Immaculate Conception in Aden, which was built in 1960, had already been badly damaged last May amid the current conflict.

On Wednesday (9 December) further damage was caused when militants detonated explosives in the church.

The roof was destroyed, although the walls are still standing. There are unconfirmed reports that local people tried to protect the church.

The church was used for Mass on Saturday evenings until late March 2015, but after that the conflict made it impossible to have services there.

The damage in May was incurred during air strikes by Saudi-backed forces targeting Houthi rebel positions.

It is understood that Houthi rebels formerly used a house adjacent to the church.

The ongoing conflict has led to a deepening humanitarian crisis in Yemen.

In their appeal, the Church leaders requested prayers “that the small remaining expatriate Christian community in Yemen will know the Father’s comfort and strength, and the Son’s close presence”.

“That peace and justice will be restored in Yemen.”

“That humanitarian aid will reach all who are in need and that all Christians in Yemen will know the Spirit’s guidance in every aspect of their life and witness.”