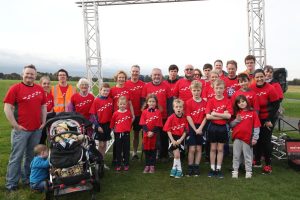 Miles for Mission had the joy of families’ participation this year. As preparations continue ahead of the World Meeting of Families 2018 (WMOF), the event included a 2km “families helping families” walk/run. This fun event was an opportunity for families to meet and chat with some Irish missionaries.

“The whole idea of Miles for Mission is to raise awareness that we as a church are missionary by nature,” Fr Maurice Hogan, SSC, and National Director, World Missions Ireland told catholicireland.net.

“It (the run)is primarily to raise consciousness and especially now with the Pope’s visit and WMOF. The (WMOF) theme is that all families are missionary families and all looking outward to spread the good news of the Lord especially to those who have not had an opportunity, for one reason or another, to hear the Good News that God loves them and that He wants what is best for them.”

Fr Hogan was glad to meet some of the younger participants and said they have great ideals which can help bring forward mission both at home and abroad. He told catholicireland.net that it is important to reach out to people wherever they are such as participating in sports. 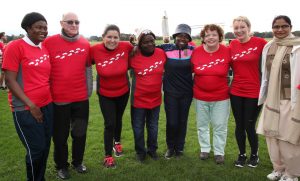 Archbishop Kieran O’Reilly of Cashel & Emly, was present at the event and thanked those who registered and travelled to take part. The Archbishop highlighted the importance of events like Miles for Mission in raising awareness of overseas mission.

There were around 100 people present in the Phoenix Park, Dublin on Saturday 14th October  for the family, 5km and 10km run/walk which started at 10.30am.

Many runners and walkers took the opportunity to hear about the work of missionaries as they walked with returned missionaries from the SMAs, OLAs, Columban Fathers and others who were all present. Those retired missionaries who could not attend were praying for the event. Medals and T-shirts were presented to all who participated in what was the second such event. Everyone hopes it will be back bigger and better for next year.

This was an event of the Mission Month of October which aims to highlight overseas mission and to raise funds for missionaries working with some of the most impoverished people around the world.

Other events for the remainder of October include:
Friday, 20th October: “Maynooth, Ireland and the Far East,” a one-day conference to mark the centenary of the Columban Fathers and the Maynooth Mission to China.  This takes place at St Patrick’s College, Maynooth.