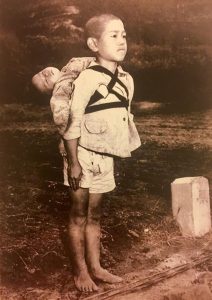 A photo of a boy queuing outside a crematorium in Nagasaki with the body of his dead brother on his back. (Pic Joe O’Donnell)

The Pope has put refugees and migrants at the centre of his message for World Day of Peace, which the Church celebrates each year on New Year’s Day.

Opening his message with the exhortation, ‘Peace to all people and to all nations on earth!’, Pope Francis says that among those whom he constantly keeps in his thoughts and prayers there are the  ‘over 250 million migrants worldwide, of whom 22.5 million are refugees’.

The Pontiff reminds that refugees endure hardships and suffering and barriers are placed in their way, but they are willing to risk their lives on journeys that are often long and perilous in a bid to find peace.

“In a spirit of compassion, let us embrace all those fleeing from war and hunger, or forced by discrimination, persecution, poverty and environmental degradation to leave their homelands,” he says. “We know that it is not enough to open our hearts to the suffering of others.  Much more remains to be done before our brothers and sisters can once again live peacefully in a safe home.  Welcoming others requires concrete commitment, a network of assistance and goodwill, vigilant and sympathetic attention, to say nothing of resources, which are always limited.”

Looking at the reasons why people become refugees and migrants, the Pope notes that ‘the new century has registered no real breakthrough [in the search for peace]’. He says, “Armed conflicts and other forms of organised violence continue to trigger the movement of peoples within national borders and beyond.” Additionally, others migrate because they desire a better life with better economic and educational opportunities.

“Many destination countries have seen the spread of rhetoric decrying the risks posed to national security or the high cost of welcoming new arrivals,” says the Pope. “Doing so demeans the human dignity due to all as sons and daughters of God. Those who, for what may be political reasons, foment fear of migrants instead of building peace are sowing violence, racial discrimination and xenophobia, which are matters of great concern for all those concerned for the safety of every human being.

“All indicators available to the international community suggest that global migration will continue for the future.  Some consider this a threat. For my part, I ask you to view it with confidence as an opportunity to build peace.”

There are ‘Four Mileposts’ that we should use to direct our response to global population movements, says Francis. “Offering asylum seekers, refugees, migrants and victims of human trafficking an opportunity to find the peace they seek requires a strategy combining four actions: welcoming, protecting, promoting and integrating.

Welcoming calls for expanding legal pathways for entry and no longer pushing migrants and displaced people towards countries where they face persecution and violence.  It also demands balancing our concerns about national security with concern for fundamental human rights.  Scripture reminds us, says Francis, ‘Do not forget to show hospitality to strangers, for by so doing some people have shown hospitality to angels without knowing it’.

Protecting has to do with our duty to recognise and defend the inviolable dignity of those who flee real dangers in search of asylum and security, and to prevent their being exploited.  God does not discriminate, says Pope Francis, quoting scripture again: “The Lord watches over the foreigner and sustains the orphan and the widow.”

Promoting entails supporting the integral human development of migrants and refugees and integrating means allowing refugees and migrants to participate fully in the life of the society that welcomes them.

The Pope finishes his message by noting that this year, 2018, marks the centenary of the death of St Frances Xavier Cabrini, who is the Patron Saint of Migrants and whose feast day is 13th November. Pope Francis says, “This remarkable woman, who devoted her life to the service of migrants and became their patron saint, taught us to welcome, protect, promote and integrate our brothers and sisters.  Through her intercession, may the Lord enable all of us to experience that ‘a harvest of righteousness is sown in peace by those who make peace’.”

Separately, Pope Francis issued a card for World Day of Peace, which bears the stark image of a young Japanese boy carrying his dead brother on his back while queuing outside a crematorium. The younger boy was one of tens of thousands killed by the atomic bomb that the United States dropped on Nagasaki in August 1945.   Next to the photo, which was taken by US Marine Joe O’Donnell, the Pope has written four short words: “The fruit of war.”