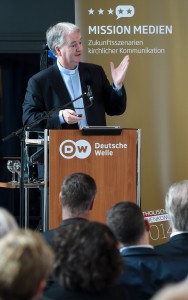 Pope Francis has appointed Irishman, Monsignor Paul Tighe, as a bishop and assistant secretary to the prestigious Pontifical Council for Culture.

In an announcement on Saturday, the Vatican said the Irish priest would move from his role in communications to the Pontifical Council which is involved in developing the Catholic Church’s engagement with contemporary culture.

Monsignor Tighe is currently Secretary of the Pontifical Council for Social Communications where he has focused on reforming the Vatican’s media, along with former BBC Trust Chairperson, Lord Chris Patten.

Last July a new Secretariat for Communications was established to oversee the all of the Vatican’s communications offices.

Responding to the news of the appointment, Archbishop Diarmuid Martin of Dublin congratulated Mgr Tighe and said the appointment was a sign of the personal appreciation of Pope Francis for his work.

Archbishop Martin described the former lecturer in theology as “a person of integrity and competence, whose innovation in media relations has made a significant impact in the Church around the world”.

He also referred to the important contribution that Bishop-elect Tighe had made to the work of the Archdiocese of Dublin and the Church in Ireland before his appointment to Rome.

The 57-year-old priest’s first appointment was as parish chaplain and teacher in Ballyfermot. Subsequently, he was assigned to study moral theology at the Pontifical Gregorian University in Rome.

In 1990, he was appointed as a lecturer in moral theology at the Mater Dei Institute of Education in Dublin and at Holy Cross College in Clonliffe.

In 2004, he was named as Director of the Communications Office of Dublin Diocese.

In 2005, he established the Office for Public Affairs which aimed to promote the engagement of the Diocese with public institutions and civic society.

In November of that year Pope Benedict announced his appointment as Secretary of the Pontifical Council for Social Communications.

Mgr Tighe was born in 1958 and attended the De La Salle Primary School in Navan and completed his secondary education at Summerhill College, Sligo.

He graduated from University College Dublin in 1979 with a degree in Civil Law.

Having studied for the priesthood at Holy Cross College, Dublin and at the Pontifical Irish College in Rome, he was ordained a priest of the Dublin Diocese in 1983.

Mgr Tighe was involved in setting up the @pontifex twitter handle created originally for Pope Benedict and subsequently used by Pope Francis.

In his keynote address at the conference to mark the 40th anniversary of the setting up of the Catholic Communications Office in Maynooth last October, he related how when the twitter account was first launched there was an immediate attempt to drive the Pontiff out of the digital space with negative trolling.

Calling on prelates and faithful to become “digital missionaries”, he compared the digital world to a new continent in need of evangelising, and said Christians should try to give the internet a soul.