Parents must be catechised in order to pass on faith 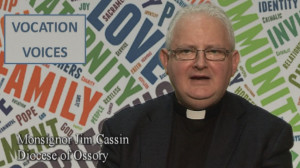 It is essential that parents are catechised in order to be able to carry out their role as evangelisers of their children, the head of the Bishops’ Commission for Catholic Education and Formation has said.

Mgr Jim Cassin told a meeting of the Catholic Principals Association in Cookstown, Co Tyrone last Friday that parents have “a critical role” in the religious life of their children.

The emphasis on catechised parents was to empower them to “carry out their formative role as evangelisers of their children,” he said.

The Executive Secretary to the Commission for Catholic Education and Formation of the Irish Episcopal Conference outlined in his address the principle characteristics of Catholic schools.

He told delegates that in his view there were five essential elements that give the Catholic school its particular characteristic spirit or ethos.

These five elements were the belief that the human person is made in the image of God and is therefore worthy of respect and dignity.

The second principle was the belief that we meet God in the ‘bits and pieces’ of everyday life. Our daily interaction is the stuff of our relationship with God and that is why liturgy and prayer are part of the life of the Catholic school.

The third principle was the belief that we are saved as a community. “We are part of each other and it is together that we become the people of God in the world,” Mgr Cassin said.

He said a key element of the Catholic school is learning how to live in respect for one another and with a special care for those who have less or are suffering.

The fourth principle concerned the Catholic school’s part in the long tradition of the Church in faith-based education.

“The Church has made an enormous contribution to the formation of young people and to society over the years from within the Catholic Christian tradition, from pre-schools through primary, post-primary and third level institutions. In our time it is our duty to be faithful to that tradition and to interpret it anew for the people of this time and for the common good of society,” he said.

The last principle was the value placed on knowledge. He said knowledge is important to us, to learn about ourselves, each other and the world in which we live.

“Accordingly, the Catholic school will strive to provide an education of excellence where the acquisition and development of knowledge in all its depth and breadth will be central to the work of the school.”

He then outlined to delegates five practical applications of the five principles. Amongst these he said the school must recognise that young people are capable of handing on the faith through the experience of ministry in social justice and in peer leadership.

He also highlighted the critical role of parents in the religious life of their children and said the faith formation of the young which is nurtured and deepened at first and second level in schools must continue at third level and throughout adult life.

A key transition takes place with the entry to university. Ways of supporting the catechesis of young people through university is fundamental to on-going development of the faith, Mgr Cassin suggested.

He concluded by saying that if all the above takes place during the school years, it was realistic to expect that some will hear the call to religious life and priesthood.

“There is no doubt that Catholic schools nurture faith in the young and the lives of many pupils are testament to their faith.  The Church and schools need to find ways of vocational recruitment and discernment,” he said.