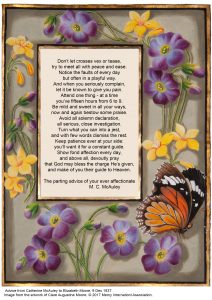 The Venerable Catherine McAuley acted as mother to nine children in her lifetime, a live-streamed YouTube presentation will reveal.

Catherine McAuley looked after or unofficially adopted her three nephews and two nieces (the children of her sister, Mary), her cousin Anne Conway’s two daughters, Teresa and Catherine, and two orphans she fostered while in Coolock.

She was so busy caring for the children that she could not take up residence at the Baggot St House of Mercy when it was ready, and entrusted it to Mary Anne Doyle and Catherine Byrne, helping them when she could.

These are just some of her experiences to be shared in an hour-long programme to be live streamed on YouTube by the Mercy sisters ahead of the World Meeting of Families (WMOF) 2018.

The programme is to be presented by Brenda Dolphin, rsm, Postulator for the Cause of Catherine McAuley, who will explore Catherine McAuley’s relationship with members of her family as daughter, sister, aunt, adoptive parent, cousin and friend.

“I think that Catherine’s story, with so many wonderful ways she was part of families, speaks to people who are not necessarily part of a traditional family,” Sr Anna Nicholls, rsm, told CatholicIreland.net

Sr Anna, who is Leader, Heritage & Spirituality, Mercy International Association, Dublin, said that after Vatican II the Church invited Mercy sisters to “reclaim the charism of Mercy” and go back to their roots and stories, “and ever since then we have continued to unfold wonderful stories about Catherine and her life.”

Catherine McAuley, founder of the Mercy sisters, was reared by her father and mother until she was five years old. However, when her father died, it could be said that Catherine was raised in a one-parent family with her widowed mother.

She was orphaned in her teens and was cared for first by relatives and later by a couple, William and Catherine Callaghan. She was sometimes separated from her brother and sister. She nursed her sister, Mary, in her final illness and cared for her nieces and nephews after Mary’s death.

Mary Reynolds, rsm, CEO Mercy International Association, has written about Catherine McAuley’s experience of family, stating: “In addition to the usual demands of caring for children, Catherine had the painful experience of the deaths of four of these (Mary’s children) during her own lifetime as well as the estrangement of a fifth – Willie – Mary’s youngest child.”

In an article written in preparation for WMOF, Mary Reynolds also stated that Catherine’s brother, James, did not approve of the Baggot St Mercy House and referred to it as “Kitty’s Folly”, though the siblings stayed in touch. “He and his family were at her bedside in her final illness and he spent time alone with her before her death,” she wrote.

Catherine Mc Auley’s own writings include many references to family. “Put your whole confidence in God. He never will let you want necessaries for yourself or children,” she wrote in a letter to Sr Angela Dunne, dated 20 December 1837.

In a poem to Sr Elizabeth Moore, she offered advice to leaders, but it could equally apply to families. The poem includes the following lines:

“Turn what you can into a jest,
and with few words dismiss the rest.
Keep Patience ever at your side:
you’ll need it for a constant guide.
Show fond affection every day …” 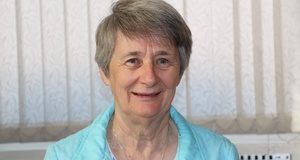 The session on Catherine McAuley by Brenda Dolphin, rsm, will be filmed before a live audience and streamed live on YouTube on Saturday and Sunday 4 and 5 August at 9 a.m. (Irish time).

The final session on Sunday at 7 p.m. will facilitate those who want to watch from New York, San Francisco, Peru and South Africa.