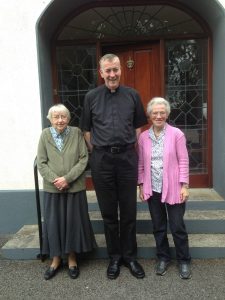 The last two Sisters of Mercy have left Rathangan as their convent closed after a presence of 142 years.

At the farewell and thanksgiving Mass at the Church of the Assumption, Rathangan, last Saturday 26 August, the oldest surviving past pupil of Bunscoil Bhríde, Mrs Olive Harrison (93), unveiled a plaque. Mass was celebrated by parish priest Gerard O’Byrne and former curate Fr Micháel Murphy.

Fr O’Byrne said it was an emotional and sad evening, but the Sisters would leave a great legacy in education and pastoral care. He thanked God for the work of the generations of Sisters of Mercy who served in Rathangan. Mary Hipwell, Parish Pastoral Council, said the nuns, always part of the community, were felt through their quiet presence.

A representative of the Sisters of Mercy leadership said that the closure was a necessary response to falling numbers of those entering the convent, but was a sad moment. 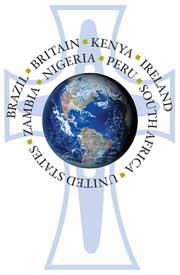 The Convent of Mercy, St John’s, Rathangan, was founded in 1875 with the arrival of five Mercy sisters from Alton, Staffordshire, England. Since their arrival, the Mercy sisters have made their presence felt in all aspects of life in Rathangan.

The Diocese of Kildare and Leighlin said in a statement: “Sadly today they leave Rathangan and we pay tribute to their contribution on this emotion filled day. To Sr Rosariii and Sr Bernadette we say Ad Multos Annos as they move to their new community in Booterstown in the south of Dublin.”

The staff and pupils at Bunscoil Bhríde, which the Sisters of Mercy founded, marked the sisters’ departure before school term ended in June.

“We will not be sad that Sr Rosarii and Sr Bernadette are leaving Rathangan, but we will be joyous in celebrating the wonderful legacy they leave in their wake,” they stated.

They honoured the Sisters on their Celebration Day on 27 June, when Fr O’Byrne celebrated Mass in the church, followed by a celebration in the school hall, which a large number of community members attended.

“This was a very special day for us as we celebrated the wonderful work that the Sisters of Mercy have done for Rathangan and for our school, Bunscoil Bhríde, in particular. It was with a great sense of appreciation and gratitude that we marked their leaving at our Celebration Day,” they said.

Bunscoil Bhríde reported on its website that after the sisters arrived in Rathangan in May 1875 they opened their school and provided primary education for girls and taught cookery and needlework.

The sisters taught in the primary school until 1986. Sr Rosarii Murphy was the last Mercy principal and Sr Ailish O’Brien the last sister who taught in Bunscoil Bhríde.

Several convents have been closed in recent years, and catholicireland.net has reported on Mercy convents closing in Rochfortbridge, Co. Westmeath; Doon, Co Limerick; Ballyhaunis,Co Mayo; and in Drogheda.