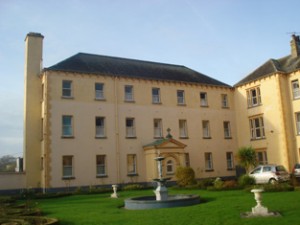 Tributes have been paid to the Sisters of Mercy who will leave a Co Limerick village this summer after 151 years.

The order will leave their convent in Doon in East Limerick with the Sisters moving to a number of nearby convents.

The Mercy Sisters arrived in Doon at a difficult time in the parish’s history.

The Famine and its aftermath mark one of the darkest chapters in the history of Doon parish.

The arrival of the Sisters of Mercy on 7 February 1865 from Kinsale, Co Cork helped to transform the parish and surrounding area.

Fr Patrick Hickey, parish priest of Doon 1824-1864, was responsible for their coming, having left them his house and farm; his niece Mother M. Augustine Hickey was the leader of the group.

A few weeks later the first postulant entered. She was Jane Greene of Glengar, from the hills above Doon.

Religious instruction and visitation of the sick were the main works at first. There was no school so Sunday classes were conducted in a small part of the garden called ‘The Bower.’

Building began and schools and additions to the convent were completed. The first school was ready in 1868 and around 1878 a small boarding school was started for children who were too far away to attend daily; some of the students had lost parents and came from various parts of the country.

The Sisters’ popularity continued to grow. The schools flourished, primary, technical classes and secondary and were renowned for success in choral and plain chant competitions and for the number of girls who went on to become Sisters in Ireland and on the missions.

One of the first documentaries on Irish television was the Radharc programme ‘The parish with the most vocations in Ireland – Doon, County Limerick.’

For the centenary celebration of the convent in 1965, it was revealed that 296 girls from the schools had become Sisters throughout the century.

Speaking to the Limerick Leader newspaper, Doon Parish Priest Fr Tony Ryan said the news that “the nuns were leaving us in Doon was learned with great sadness and disbelief but also with a great sense of appreciation and gratitude”.

He said the contribution of the Sisters of Mercy in the field of education is “immeasurable”.

“They have prepared so many people for exams but more importantly for life with their high standards. Not only that but their participation in the parish life of Doon in pastoral and social areas has been immense. They have touched the lives of all our people and they are loved and respected by young and old. The good they have done is known to God alone,” said Fr Ryan.

The nuns have participated actively in the life of the church as Eucharistic ministers, readers, parish choir, sacristans, pastoral council, pioneers, Legion of Mary, board of management, and also after retirement been actively involved in learning support and home school liaison.

According to Fr Ryan, “Their beautiful chapel is open to all for Mass and sacraments with liturgies prepared. The chapel is maintained so beautifully.”

He added, “They have not only provided employment for many down through the years but they have been so generous with their property. They have given a site for the community centre, they have facilitated the exchange of land for the GAA field and a site for the magnificent new secondary school – Scoil na Trionoide Naofa.”

According to Fr Ryan the Order also “gave the parish a bequest which has enabled us to purchase a site adjacent to the village to extend our cemetery,” said Fr Ryan. “On behalf of the parish, he says they are eternally grateful to the Sisters of Mercy.”

The Mercy Order confirmed this week that the seven remaining nuns will move to new convents in Cappamore, Limerick city, Tipperary Town and Templemore before it shuts on 1 July.

The Archbishop of Cashel & Emly, Dr Kieran O’Reilly, will be the chief celebrant at a Mass of thanksgiving on Sunday, 12 June.