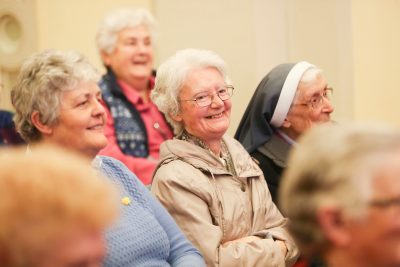 A touch of Hollywood came to Dublin last weekend with the premiere of the film In God Alone: the Story of Catherine McAuley.

The official launch of Catherine McAuley biopic was held last weekend at Mercy International Centre, Dublin. The film, which was produced by members of the Mercy Health St Louis Group, tells the story of foundation of the Sisters of Mercy in 19th century Dublin.

Almost 25 years ago, the docu-drama Circle of Mercy was made about the life of Catherine McAuley. While the story of this heroic Dublin woman has not changed, it was time for a new version to be created, Sr Mary Reynolds rsm told CatholicIreland.net.

Sr Mary Reynolds said that last October a team from Mercy Health in St Louis, United States, were visiting headquarters in Dublin. They watched the previous version of the film, and realised that a new film was a long-term project which would need fundraising. CEO Lynn Britton and some of the senior staff from Mercy Health St Louis decided to remake the documentary using the talents and resources of their organisation in the United States.

“Now, 12 months later, after film shoots in both Ireland and the United States, In God Alone, the Story of Catherine McAuley has been produced. We hope this film will enable a new generation of Mercy women and men to explore and be inspired by the life and actions of this selfless woman of Mercy, Catherine McAuley,” Sr Mary Reynolds said.

The 23-minute film highlights the actions of Catherine McAuley who gave all, both in day-to-day actions and financial support, in service of others. She challenged the existing structures of the Church and society at the time, and toward the end of her life found a way to continue her works of mercy through the establishment of the Sisters of Mercy in 1831. 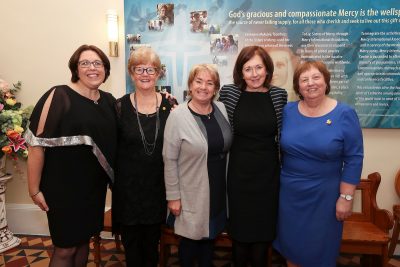 The screening was attended by the Mercy International Association  (MIA) Board members and present and former staff, Sisters of Mercy, partners-in-Mercy, consultants, donors and representatives of Mercy Health St Louis Group.

The film will have its United States premiere in St Louis on 5th December. From 6th December 2018 until 1st March 2019 the film will be available for Mercy groups throughout the world who wish to hold a screening event as a fundraiser for MIA.