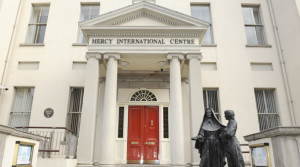 Catherine McCauley’s concept of ‘mercy’ was not one of condescending consolation, but one which built people up through education and health care and fulfilled them through the knowledge that they are loved by God, according to Archbishop Diarmuid Martin of Dublin.

In his homily on Wednesday to celebrate Mercy Day and the 20th anniversary of the Mercy International Association he said, “The Church itself has so often transmitted a sense of guilt in the hearts of those who fail. Our world and our Church need a new resurrection of the sense of mercy.”

He said he used the term resurrection, because “ours is a faith of resurrection, where God’s activity is not that of humiliation, but of raising up and enabling and encouraging and giving new hope and vision.”

He added that the challenge posed by Pope Francis for the up-coming Synod of Bishops is to be “open to ways of applying the primacy of mercy to particular situations while remaining faithful to fundamental truth.”

“But the implications of the primacy of mercy will only be understood when we grasp how all human relations must be characterised by mercy and not just self-interest, but also that mercy is not passive acceptance of everything – a soft spirituality – but is also part of the path of living the Cross.”

He was speaking on the second day of celebrations for the Mercy International Association.

Twenty years ago, the house at 64a Lower Baggot Street where Catherine McCauley founded the Mercy, opened as a heritage house and home for the Sisters of Mercy worldwide. In order to facilitate this, the Mercy International Association (MIA) was formed.

Celebrations for the 20th anniversary started on Tuesday 23 September with a welcome reception and formal opening event at the MIA chapel. The event was streamed live on the internet to thousands of the Mercy family and friends and associates globally.

Mary Reynolds rsm (Executive Director MIA) welcomed those present in person and online. She began with the words from the Mercy Day greeting of Elizabeth Davis rsm (Newfoundland) and her sense of occasion:

She added that the Jewish people celebrate the New Year on Wednesday when they “remember that God created the world and as co-creators they commit themselves to heal, repair, and transform the world.” 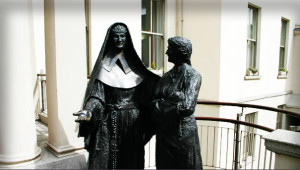 The opening was “a great start to a great week” according to Sisters who joined in online from Ireland, Aotearoa, Newfoundland and South Africa and responded online.

The week involves a celebration of the past and present as well as a looking ahead for the future.

On Wednesday 24 September, Mercy Day was celebrated with a special Mass in St Mary’s Church, Haddington Road with Archbishop Diarmuid Martin.
On Thursday 25 September, President Michael D. Higgins addresses the gathering on the theme of Mercy around the World with Ambassadors from member areas attending.
On Friday 26 September, the theme of Sustainable Development & Opposing Human Trafficking is addressed while the next day will involves a discussion on Shaping Mercy into the Future.

There is also the Face of Mercy Today exhibition on display at MIA Baggot street premises until 6 October, for anyone wishing to visit.