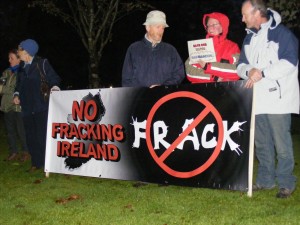 Global Frackdown Day is a day of action involving over 200 community groups from 20 countries.

Organised by Food and Water Watch, and supported by Mercy International Association (MIA), it brings together those who are alarmed by the effects of fracking.

Several groups will also screen the Academy Award nominated documentary ‘Gasland’, which focuses on communities in the US which have been impacted by natural gas drilling.

Speaking ahead of Global Frackdown Day 2013, Mary Purcell, Assistant Director of MIA Global Action Programme, said the day “offers an excellent opportunity for people around the world to join together to express their concerns about fracking, a hugely hazardous method of gas extraction.”

She explained that Mercy Global Action has long advocated for an alternative to fracking, and has made numerous submissions to the UN on the issue.

“We invite everyone to join with MIA to call on Governments around the world to examine the long-term effects of fracking, both on the earth’s natural resources, and on the communities where it takes place.”

She added that they wanted to send a strong message to elected officials that a future powered by clean, renewable energy is the only way forward.

Fracking is a dangerous method of gas extraction that involves blasting millions of gallons of chemically-treated water into the earth to extract gas from underground deposits.

The process may compromise drinking water supplies while extracting gas in this manner consumes vast amounts of energy and water.

The building of the well structures causes degradation of air and water quality, stripping of forests and agricultural lands, increasing noise and traffic, and wear on roads and bridges that are often already poorly maintained.  Fracking also has negative economic effects on agriculture, tourism and jobs.

In many cases, the oil companies involved are not obliged to disclose the chemicals they are powering into the ground. As such, the public is unaware as to the long-term effects that fracking will have on their lives and livelihoods.

Fracking is a huge concern in many of the countries where the Sisters of Mercy minister, Mary Purcell said.

While fracking has not yet begun in Ireland, nine counties have been targeted as potential fracking zones including Leitrim, Fermanagh, Donegal, Mayo, Sligo, Clare, Limerick, Cork and Kerry.

Many of these are idyllic regions of land with mountains, lakes, rivers and areas of great beauty that will become heavily industrialised zones if fracking commences.

In 2013, the Government attempted to rush through an exploration license agreement with the Tamboran hydrofracking company. MIA, with others, made a strong submission which was effective in postponing the licensing until the possible effects are properly researched and assessed.