Home > News > Mercy in the Mall captures hearts of the public

Mercy in the Mall captures hearts of the public 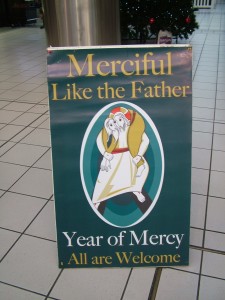 The Year of Mercy began with a bang in the parish of Shannon last Tuesday when twenty priests were available in different sections of the Skycourt Mall for people who wanted to celebrate the sacrament of confession, have a chat, a blessing or engage with a priest at the start of the Year of Jubilee.

The priests were bowled over by the positive and enthusiastic response they received from the people of Shannon.

“By the end of the day, there were queues of people waiting for Confession at all the locations. One woman told me she went around three times looking for a priest, but the queues were so long that in the end she went away.”

Some people returned to the sacrament of reconciliation after many years. For one person it had been more than fifty years. Another, a woman, said it was her first time to Confession in twenty-five years.

“I feel very liberated. I feel I’ve done something that I’ve been putting off for a long time,” she told CatholicIreland.net.

Fr Ryan, who came up with the idea of ‘Mercy in the Mall’ as a response to Pope Francis appeal to bring the message of mercy to the market place, said he did not know how many people went to Confession but “twenty priests were kept going for five hours”.

“One woman told me, ‘I went away a happier person then I was when I came in,’” he said. 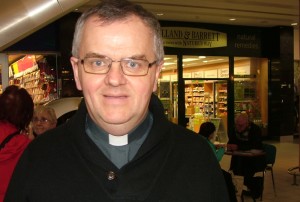 Fr Ryan was taken aback by the public and media response although he was convinced all along that the outreach would go well.

“I wrote to all the enclosed religious orders in Ireland and asked them to pray so I knew it wouldn’t be a failure but it was better than I could have imagined,” he said.

At the oratory attached to the Skycourt centre, parishioners doing Eucharistic Adoration were also at prayer.

The parish priest from Shannon had told his fellow clergy to “bring a book” in case things were quiet on the 8 December but in the end there was absolutely no time for reading.

Fr Arnold Rosney told CatholicIreland.net that when Fr Ryan had launched the idea to his fellow clergy they were initially surprised. “It’s creative and it’s different but I was mindful that it was a risk.”

At the end of his first hour-long session he was enthusiastic. “It has been fantastic. I’ve been sitting meeting people for a full hour without a stop, whereas if I was in the church I might meet maybe just three or four.” 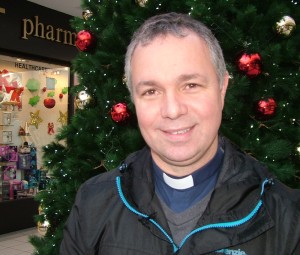 Fr Rosney said the presence of the priests at the Skycourt was a gentle one.

“It’s not obtrusive. We are there to the side. People stop and say ‘Ah hello, this is what you are doing.’ And then you offer a prayer card or our Christmas magazine and then they sit down [and say] ‘Actually, you know, I’ll have Confession now.’”

Canon Brendan O’Donoghue said he thought people might be reluctant to go to Confession in the open but “they were absolutely delighted to just come out of the shop and whatever, put down their bags and have a chat, Confession, a blessing,” he told CatholicIreland.net.

The event was covered by local and national media, and UTV Ireland and CNS (Washington) both sent film crews on the day.

“It has got people talking. They know it is the Year of Mercy and they know about Confession,” said Fr Ryan.  Asked where they might go from here he replied, “We might start in the canteens of factories – we’ll see.”