Home > News > Two ordained to the priesthood in Dublin 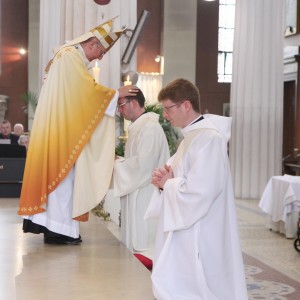 On the Feast of St Kevin, the co-patron of the archdiocese of Dublin, Archbishop Diarmuid Martin ordained two new priests for ministry in his diocese.

Fr Christopher Derwin and Fr Paul Glennon are part of a batch of fourteen ordinations to the diocesan priesthood taking place in the Irish Church this year.

In his homily at St Mary’s Pro Cathedral on Wednesday, the Archbishop told the two men that priesthood is a gift for “the building up of the Church”.

He emphasised that “It is not a personal privilege or some form of social recognition.”

Priesthood, he said, is not a matter of doing a job.

“It is a matter of identification with Jesus” and he warned them that being a priest “is not easy” and that they could become unsettled and anxious, cynical or resigned. 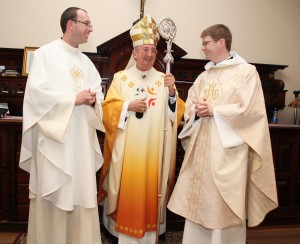 Referring to the crisis in vocations, Dr Martin asked, “How do we say to a young man in today’s world that being a priest is a worthwhile vocation, that it is worth the effort of renouncing many aspects of life and giving oneself totally to the Lord?”

Acknowledging that there are many things to do in the busy life of a priest today, the Archbishop highlighted that priests can easily become so busy in doing things, that they fail in what is central.

“We can make ourselves happy through doing things, but end up burnt out and empty hearted.”

Activism by itself can be a mark of great generosity, Dr Martin said but warned that it can also be a way of thinking that we are at the centre of our priesthood.

“Action becomes fruitless if all we have to offer is the frenetic accomplishments of ourselves,” he said. 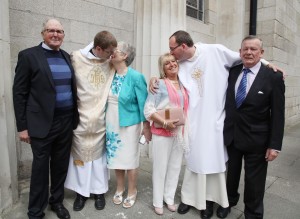 Pic shows Fr Paul Glennon being congratulated by his parents John and Mary and Fr Christopher Derwin getting best wishes from his parents Rita and Christopher after the ordination ceremony in St Mary’s Pro Cathedral Dublin on Wednesday morning. Pic John Mc Elroy.

Up to Wednesday’s ordinations, the archdiocese of Dublin had just two priests under the age of 40.

However, the picture looks slightly rosier now as Fr Christopher Derwin is just 32 years old and has the honour of being the youngest diocesan priest in the archdiocese of Dublin while Fr Paul Glennon is 41.

Fr Derwin worked in well-known Dublin pubs like Graces and Tramco in Rathmines, as well as Madigans before joining the priesthood.

Over the years, he received a number of awards for his voluntary work with the disabled, elderly and youth groups including the Ambassador of Dublin Award and the Outstanding Volunteer Achievement Awards in 2005.

Fr Paul Glennon is originally from Dunmore in Co Galway. 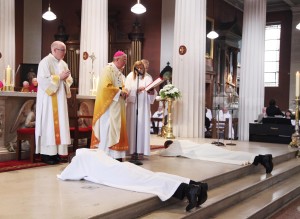 The former mechanical engineer lived in Manchester and Kilbeggan in Co Westmeath before joining the priesthood.

His rediscovery of his faith came through the charismatic conference, World Youth Day in Cologne and Emmanuel School of Mission in Rome.

He was joined by his parents John and Mary as well as his four bothers and four sisters at the solemn ceremony in St Mary’s Pro Cathedral in Dublin.

At the end of Mass, Archbishop Martin urged the packed congregation to pray for vocations which he said begin in families and local communities.