Six deacons ordained for the Dominicans 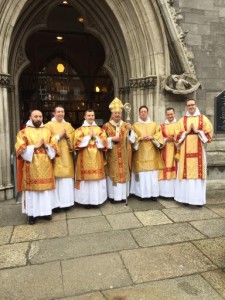 The Irish Province of the Dominicans celebrated the ordination of six men to the diaconate by Archbishop Diarmuid Martin on Sunday.

The six brothers ordained have been studying philosophy and theology at St Saviour’s in Dublin for the past six years and will continue their studies until their ordination to the priesthood next year.

Their ordination will coincide with the Dominican Order’s celebration of the 800th anniversary of its foundation.

It is the largest ordination group in the province since the early 1970s.

The newly ordained deacons will begin their ministry of service in St Saviour’s before being sent elsewhere in the Irish province to preach and gain experience of different communities and pastoral situations.

In his homily, Archbishop Martin told the young men “you are called to be preachers”.

“The credibility of how you preach the message of Jesus in today’s society will depend also on the sensitivity of the language which you use.”

“God sent his Son into the world not to condemn the world, but so that through him the world might be saved”.

The Archbishop highlighted that the preacher is not just one who is learned and gifted in speech.  “As preachers you are called to be authentic witnesses in your lives to the truth of the Gospel of Jesus Christ,” he said.

Elsewhere in his homily, he referred to the Gospel and Nicodemus, saying that in today’s world there are many what he called “Nicodemus Catholics” whose faith remains “personal and important for them, but it does not bring them to the point of public witness to the truth of Jesus’ life and message”.

Nicodemus Christians are interested in and fascinated with the preaching of Jesus, yet living a sort of de facto atheism: making their fundamental choices as if their faith in God was only marginal to the realities of their lives, he warned.

“And when I say believers, it must be said that clerics and religious too can fall into such a situation”, he added.

Addressing the six young men, he told the deacons that “without practising in love what you believe, your teaching will not be authentic, because it will be preaching a Gospel that you only pretend to believe”.

“Without love you preach only what is fruit of your own uncertainties, your own fears and frustrations and compromises,” he added.

The Primate of Ireland continued, stating that the truth about Jesus Christ can only be proclaimed in love.

“This is a challenge in today’s culture where often there is a clash of viewpoints and where we find it difficult at times to bring the message of our faith into a culture where faith is considered irrelevant to or out of place in public discourse,” he said.

Is a message of faith irrelevant in a pluralist society? he challenged.

“Should we Christians return to a Nicodemus-style existence and keep the insights of faith within our own hearts alone,” he questioned.

But the Archbishop then underlined that people tend to forget that much of what is cherished as good in secular society is, in fact, the fruit of Christian culture.

“The message of a God of love is anything but irrelevant to today’s harsh world, if we present it not just in words but through witness to the truth in love,” he said.