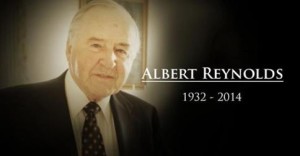 The removal of the former Taoiseach Albert Reynolds took place on Saturday evening in the Church of the Sacred Heart in Donnybrook, Dublin.

Addressing mourners including family members as well as political colleagues and friends, Mgr Lorcan O’Brien said they were gathered to mourn the death of a “who was rooted in the real.”

“We give thanks for the gift of the man that he was and for the much that he achieved. We honour his memory. We acknowledge our loss. We pray for him, for his family and for ourselves,” Mgr O’Brien said.

“Albert Reynolds was a man who wholeheartedly engaged with the realities of his life and engaged with passion, with purpose, with courage. His achievements were significant,” the priest said.

He said the former Taoiseach and government minister’s engagement with the realities of life was “grounded not just in a spirit of adventure, enterprise and optimism, but in a strong faith in the mystery of God, God who has revealed himself in Jesus. He was a man of faith in God and in people.”

Acknowledging that sickness and death are part of life’s realities, the priest referred to Albert Reynolds’ long debilitating illness.

“The love, respect, support and care you, Kathleen his wife, and your family gave to your husband and father in his days of decline, was a striking witness to a loving God at the heart of your reality. ‘Kindness to a father is not forgotten by God and a blessing will indeed come on you from him,’” Mgr O’Brien said.

Mr Reynolds’ declining years were his gradual movement to God. On the journey he was accompanied by grace. Life does not go to nowhere.

“The life of this man for whom we pray this evening, is a concrete expression that well lived, as his life was, through the love, mercy and forgiveness of God, is a life that goes to Gold, that God gathers to himself,” he said.

Earlier on Saturday, thousands of people filed past Mr Reynolds’ remains at the Mansion House in Dublin to pay their respects and sign the book of condolence.

His remains were taken from the Mansion House where he was reposing in the Oak Room to the Church of the Sacred Heart in Donnybrook.