Home > News > Memorial service for those who have lost a baby

Memorial service for those who have lost a baby 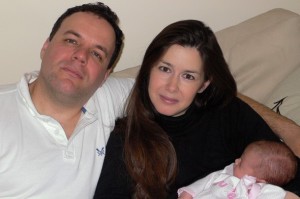 A special service is to be held in St Anne’s Cathedral, Belfast on Sunday for families who have suffered the loss of a baby at any stage of pregnancy, birth or in infancy.

The Saying Goodbye service in Belfast invites families to come and pay tribute to their loved ones.

The service is one of several taking place in cathedrals and minsters across the UK organised by English couple, Zoe and Andy Clark-Coates, who have lost five children through miscarriage.

“We decided to take the pain of loss and create an organisation that could help others who have previously, or are currently going through the grief of losing a baby,” Zoe Clark-Coates explained.

“The aim of our charity, The Mariposa Trust, is to help support those who have suffered the pain of losing a child at any stage,” she said.

In a moving blog, she shared her experience of miscarriage and how she prayed to God “the only One who truly controls life and death” to save her baby.

But “I knew she was destined to be born into heaven not onto earth.”

Zoe and her husband now run the service as a forum for those who have also suffered such a loss, no matter how long ago.

Sometimes the service is the first opportunity a couple has to grieve. In one case, they were thanked by parents who said it was the first time in 50 years that they had been able to grieve and say goodbye.

This is the first year the service will be held at St Anne’s Cathedral in Belfast and it will include music, poetry and readings, acts of remembrance and time for reflection. 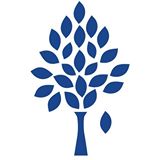 The service is free to attend and open to anyone of any faith or no faith.

The Saying Goodbye/Mariposa organisation was set up in 2012 and by 2013 held 18 services and in 2014 plans to hold 25 UK services including Canterbury, Glasgow, Llandaff, Winchester, Exeter and York.

Approximately one in four pregnancies, or 250,000 per year, end in miscarriage, plus 4,000 babies are lost through still birth and infant death in the UK alone.

“Miscarriage is often something that’s not acknowledged or talked about in the UK, and people certainly do not appreciate how utterly distressing it is for women, and indeed their extended families,”according to Professor Lord Robert Winston.

Lord Winston, who is one of Saying Goodbye’s many Ambassadors, added “It’s a loss of a precious life, and whether the loss happens in early or late pregnancy it’s traumatic, and a natural grief process must be allowed to happen.”

“I hope that these services will be a turning point in the nation, and through this new organisation miscarriage will become more widely understood, and families will know that their pain and loss has been heard and recognised.”

In the Republic of Ireland, the figure of one in four pregnancies ending in miscarriage is also true. Usually services of remembrance are held in November.

The organisation said it was “a time to remember and if possible come to terms with our own personal loss. It is also a time to recognise that for a time, however short; we had the privilege of sharing a relationship with our child.” 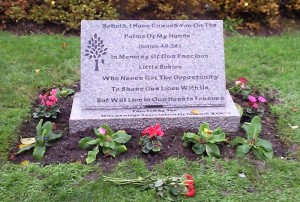 “This little life had a meaning and it is necessary for us to give attention to this existence. We may not always understand the “why” but for those of us who have been able to move on, we believe that our lives have been enriched by this painful but hugely significant time of our life.”

The Miscarriage Association of Ireland has also placed ten memorial stones (in cemeteries in Dublin and elsewhere in the country) dedicated to all babies lost before, during and after birth.

These are permanent memorials that commemorate the lost infants and they are places to visit, where parents and family can spend some quiet time in reflection and remember.