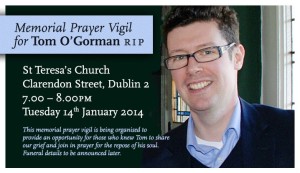 A special memorial prayer vigil will be held in Clarendon Street Church in Dublin today for Tom O’Gorman, researcher and journalist, who died tragically early on Sunday morning.

The prayer vigil will take place from 7-8pm.

In a statement issued on Monday evening, the Pro Life Campaign said the memorial vigil is being organised to provide an opportunity for those who knew Tom to share in their grief and join in prayer for the repose of his soul.

Elsewhere in their statement, the PLC said, “The tragic death of our dear friend Tom O’Gorman over the weekend has come as a huge shock and a painful loss to everyone in the pro-life movement.”

“Tom was a truly loyal supporter of the Pro Life Campaign, always ready to put his very considerable talents in research, analysis and writing at the service of the pro-life cause. His reliable, meticulous work, humbly done behind-the-scenes, helped so many good things happen.”

“Everyone who met him came away with an enhanced sense of their own worth born from the experience of his interest in them as a human being.”

“In this, Tom was something of a phenomenon. He was a ‘people person’ par excellence and a kind man who loved meeting people and getting to know them and share their lives.”

“As the news of his death has spread on TV and social media, the outpourings of sadness and memories of his goodness are reflections of the huge circle of people he knew whose lives he touched.