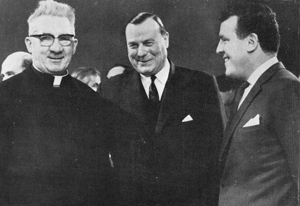 A new play about Monsignor Hugh O’Flaherty, who became known as ‘the Scarlet Pimpernel of the Vatican’ for his role in saving thousands from the Nazis, opened last night in the priest’s native Kerry.

The play ‘God Has No Country’ by Donal Courtney is showing in the Malton Hotel, Killarney as part of the sixth Memorial Week held in Monsignor O’Flaherty’s honour.

This year is special marking the 50th anniversary of the brave priest’s death and the occasion is being marked with the unveiling a new statue today Wednesday (30 October).

The memorial committee is delighted that after years of fundraising, the statue will  help preserve his incredible story in his native Ireland and will be a focal point for retelling that story to the many visitors to Killarney and Ireland.

In his welcome address, School Principal Colm O’Suilleabhain said, “It was in the ‘Old Mon’ that the Monsignor received his initial Killarney education and the current Monastery school pupils and staff have officially adopted the Monsignor as their school hero”.

“The future promotion of his humanitarian example will very much rest with this and subsequent generations of young people,” he said.

The 6th Memorial Week marks the 50th Anniversary of the death of the Monsignor and runs from Sunday October 27th to Sunday November 3rd.

It includes drama, music, talks and walks, exhibitions, a coach tour, unveilings, pitch and putt, golf, the award ceremony and a special Mass in St Mary’s Cathedral at which the Monsignor will be remembered.

On Saturday 2 November the O’Flaherty Humanitarian Award Ceremony will be held at the Killarney Plaza.

The young anti-suicide and cancer awareness campaigner, Donal Walsh, has been named as the posthumous winner of the 2013 award. The award will be presented to Donal’s family by Mayor of Killarney, Cllr Paddy Courtney.

Monsignor Hugh O’Flaherty was an Irish Catholic priest and senior official of the Roman Curia, and significant figure in Catholic resistance to Nazism.

During World War II, he was responsible for saving 6,500 Allied soldiers and Jews.

His ability to evade the traps set by the German Gestapo and authorities, earned O’Flaherty the nickname ‘The Scarlet Pimpernel of the Vatican’.